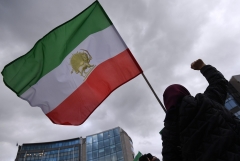 (CNS News) – During a virtual panel on crafting an effective Iran policy, national security expert James Jay Carafano said that leaders in Tehran are “probably making Biden for President signs,” but it is unclear if their lives will improve if Joe Biden wins.

During the Oct. 14 panel discussion, Carafona said that if Biden wins, it is not possible for his administration to go back to the Iran deal implemented under President Barack Obama, the Joint Comprehensive Plan of Action (JCPOA).

.@JJCarafano: Iran’s nuclear program is a global threat. Terrorism & support for terrorist groups are twin challenges that we must deal with.
The U.S. sanctions are meant to deal with these threats. sanctions should continue.#IranSanctions #Iranhttps://t.co/BU02CJzmqD

“You can't go back to the deal that you had, you know, four years ago,” said Carafono, the vice president for National Security & Foreign Policy at the Heritage Foundation. “There’s a lot of problems with that . . .I’m not sure that works for a Biden administration.”

“And, I know in Tehran, they’re all probably making ‘Biden for President’ signs, but I don't know if they think that magically their life is going to get easier if a Biden wins,” said Carafano.

The virtual panel discussion was sponsored by the National Council of Resistance of Iran.     Other panel speakers included Ambassador Eric Edelman, former Undersecretary of Defense for Policy; Ambassador Robert Joseph, former Undersecretary of State for Arms Control and International Security; Jonathan Ruhe, foreign policy director at JINSA's Gemunder Center for Defense and Strategy; and Alireza Jafarzadeh, deputy director of the National Council of Resistance of Iran and author of The Iran Threat.

.@A_Jafarzadeh: When it comes to the people of Iran, their message is clear: They want to overthrow the regime. They have been saying “our enemy is right here in Iran, not in America.” #IranSanctions #Iranhttps://t.co/YILD6MUeQv

“So, I think the real interesting question is what happens as a result of the election?” said Carafano. “I clearly think, if the Trump administration is returned to office, they’ll double down on the policies that they’re on. And I think over time, the United Kingdom will shift more towards the U.S camp.”

“The principle kind of unity of the U.K to the EU/European position now is really from the career people who are kind of still in the EU mindset,” said Carafano.  “But I think the politicals really want to move more towards the U.S position.”

“So, if Boris Johnson’s government continues to stand and they’ve gotten through the negotiations with the European Union on Brexit, and all that is in the rearview mirror -- and actually I would have thought that this would already happen -- I think the U.K will move more toward the U.S position,” said the national security expert.

“And I think that really makes the European opposition to the U.S efforts much less tenable,” he added.  “So I [think] there is no relief coming if this [Biden] team is reelected.”

“[I]f we listen to the campaign rhetoric it is, ‘Well, this is easy! We're just gonna go back to JCPOA,’” explained Carafano. “But there is no Mr. Peabody’s Wayback Machine. You can't go back to the deal that you had, you know, four years ago. There’s a lot of problems with that.”

“One is, what are you going to do about all of Iran’s cheating?” he said.  “I mean, the administration cannot sweep that under the rug. They can’t ignore that.”

The JCPOA was the deal that then-Secretary of State John Kerry struck with Iran in 2015 in a bid to curb the Islamic regime’s nuclear program.

The deal included giving the Iranian state – one of four state sponsors of terrorism --  $1.7 billion in cash; the deal also lifted sanctions which had been in place in one form or another since the Iranian hostage crisis of 1979.

On May 8, 2018, President Trump announced he was withdrawing the United States from the JCPOA and reimposing the sanctions that had been lifted by the Obama administration.

The White House stated, “President Trump is terminating United States participation in the JCPOA, as it failed to protect America’s national security interests. The JCPOA enriched the Iranian regime and enabled its malign behavior, while at best delaying its ability to pursue nuclear weapons and allowing it to preserve nuclear research and development.”

The Iranian regime is using the $1.7 billion they received reportedly to develop their nuclear capabilities, create centrifuges, and enrich uranium on an industrial scale. According to a Reuters article, in 2019 Iran increased its capacity to create nuclear weapons using capabilities granted it under the JCPOA.

Amb. Robert Joseph: Iran's regime will not abandon its nuclear program & will try to keep a path toward nuclear weapons. It will not become more moderate. Intl community should be doubling down sanctions & other means of pressure on regime.#IranSanctionshttps://t.co/r3G09N0aIK

“In a televised address, [Iranian President] Rouhani said Iran from Friday will begin developing centrifuges to speed up the enrichment of uranium, which can produce fuel for power plants or for atomic bombs, as the next step in reducing its nuclear commitments,” reported Reuters.  “Under the accord, Iran was allowed to keep restricted quantities of first-generation centrifuges at two nuclear plants. The successful development of more advanced centrifuges would enable it to produce material for a potential nuclear bomb several times faster.”

“From Friday, we will witness research and development on different kinds of centrifuges and new centrifuges and also whatever is needed for enriching uranium in an accelerated way,” Rouhani said. “All limitations on our Research and Development will be lifted on Friday.”