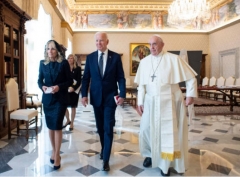 (CNSNews.com) - Bishop Thomas Tobin of the Diocese of Providence, Rhode Island, publicly urged Pope Francis in a tweet he sent out on Wednesday to challenge President Joe Biden on his support for abortion.

“Dear Pope Francis,” Bishop Tobin said in the tweet, “You have boldly stated that abortion is ‘murder.’ Please challenge President Biden on this critical issue.

“His persistent support of abortion is an embarrassment for the Church and a scandal to the world,” the bishop said.

The bishop concluded the tweet: “Thank you. Very respectfully, your brother +Thomas.”

In earlier tweet, sent out on Oct. 14, Bishop Tobin had also expressed the hope that Pope Francis would “confront” Biden on abortion.

“Pope Francis has declared that ‘abortion is murder,’” Bishop Tobin said in that tweet. “President Biden, a professed Catholic, has consistently supported, promoted and funded abortion. We fervently hope and pray that the Holy Father will confront Mr. Biden on this critical moral issue when they meet on 10/29.”

Pope John Paul II’s 1995 encyclical letter, Evangelium Vitae, declared that abortion is murder. “The moral gravity of procured abortion is apparent in all its truth if we recognized that we are dealing with murder and, in particular, when we consider the specific elements involved,” said Evangelium Vitae. “The one eliminated is a human being at the very beginning of life. No one more absolutely innocent could be imagined.”

Last month, Pope Francis himself twice publicly reiterated the that abortion is murder.

On Sept. 15, in a press conference given on board an airplane in flight, the pope said abortion is “homicide, whoever has an abortion, kills.” Then said: “That is why the Church is so harsh on this issue, because if it accepts this, it is as if it accepts daily murder.”

On Sept. 27, in an address to the Pontifical Academy for Life, Pope Francis said: “…there is a throwing away of children that we do not want to welcome, with that abortion law that sends them back to their sender and kills them. Today, this has become a ‘normal’ thing, a habit that is very bad; it is truly murder.”