Price of Gasoline Up 38% in Biden’s First Year 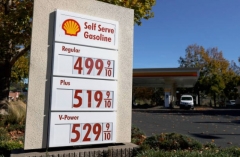 (CNSNews.com) - The price of gasoline increased 38.0 percent from February 2021 to February 2022, which marked President Joe Biden’s first full year in office, according to the Consumer Price Index numbers released today by the Bureau of Labor Statistics.

At the same time, according to the BLS numbers, the price of fuel oil increased by 43.6 percent.

Overall energy prices increased by a non-seasonally-adjusted 25.6 percent from February 2021 to February 2022.

The price increase for all items, according to BLS, was 7.9 percent from February 2021 to February 2022.

“Over the last 12 months, the all items index increased 7.9 percent before seasonal adjustment,” BLS said.

“Increases in the indexes for gasoline, shelter, and food were the largest contributors to the seasonally adjusted all items increase,” BLS said. “The gasoline index rose 6.6 percent in February and accounted for almost a third of the all items monthly increase.”