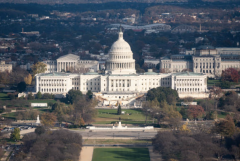 (CNSNews.com) - Governments in the United States added a net total of 188,000 jobs in the month of June, even as the federal government decreased the number it employed by 5,000, according to the monthly employment report released today by the Bureau of Labor Statistics.

Employment in private education also increased. The Bureau of Labor Statistics explained that the state and local government surge in employment was driven largely by hiring by public education institutions—as the COVID-19 pandemic began to recede.

“In both public and private education, staffing fluctuations due to the pandemic, in part reflecting the return to in-person learning and other school-related activities, have distorted the normal seasonal buildup and layoff patterns, likely contributing to the job gains in June,” said BLS. “(Without the typical seasonal employment increases earlier, there were fewer layoffs at the end of the school year, resulting in job gains after

seasonal adjustment.) These variations make it more challenging to discern the current employment trends in these industries.

However, employment in education is still down from where it stood prior to the pandemic.

Overall government employment is also still below where it was before pandemic.