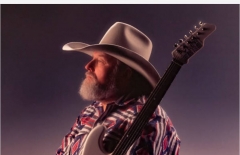 (CNSNews.com) - The great singer, songwriter and musician Charlie Daniels, who passed away today at the age of 83, once said that that the only place he wanted to live in more than Tennessee was heaven.

“Nashville is probably, well, at least one of the most competitive music cities in the country,” he said. “You’re throwing your hat into the ring. And it took a while to get anything going, but that was probably the best move I ever made.

“I tell people now when I leave Tennessee I want to go to heaven,” he said. “It’s the only other place I want to live more than Tennessee.”