Census Bureau: Only 5% of American Workers Commute on Public Transit 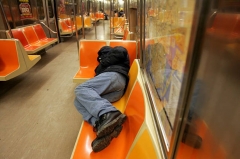 (CNSNews.com) - Only 5 percent of the Americans who worked in 2019 got to work using public transportation, according to a newly released study from the U.S. Census Bureau.

By contrast, 84.8 percent got to work in a car, truck or van that was not operated by the government; and 75.9 percent were driving alone when they did so.

The use of public transit for commuting was heavily concentrated in the New York metropolitan area.

In fact, the number of workers who commuted by public transit in the New York metro area in 2019 was more than five times larger than its nearest competitor—the Chicago metro area.

Together, the 4,452,248 commuters who used public transit in the New York, Chicago, San Francisco and Washington metro areas equaled 57 percent of all public transit commuters in the country.

Since 1960, the percentage of Americans using public transit to commute to work has been more than cut in half.

The numbers in this Census Bureau report were derived from the bureau’s American Community Survey.