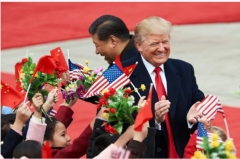 From January through April, according to data published today by the U.S. Census Bureau, the United States imported approximately $107 billion in goods from China.

(This is the Census Bureau's chart of the Top 15 countries the United States imported goods from in January through April, 2020. Figures are in billions of dollars.)

At the same time, the United States exported only $30.6 billion in goods to China—thus, accumulating a $76.4 billion trade deficit.

Canada ranked as the third source of imports with the United Stated bringing in approximately $89.8 billion in Canadian goods.

(This is the Census Bureau's chart of the Top 15 countries the United States ran merchandise trade deficits with in January through April, 2020. Figures are in billions of dollars.)

U.S. Secretary of State Mike Pompeo has stated that China “covered up” the initial outbreak of COVID-19 in Wuhan and has not fully cooperated with the United States in fighting the virus.

“China saw then that it had an emerging public health crisis on its hands. They knew,” Pompeo said in a May 6 briefing.

“China could have prevented the deaths of hundreds of thousands of people worldwide. China could have spared the world a descent into global economic malaise. They had a choice,” Pompeo said.

“But instead, instead China covered up the outbreak in Wuhan,” he said.

“China is still refusing to share the information we need to keep people safe, such as viral isolates, clinical specimens, and details about the many COVID-19 patients in December 2019, not to mention ‘patient zero,’” Pompeo said in that May 6 briefing.