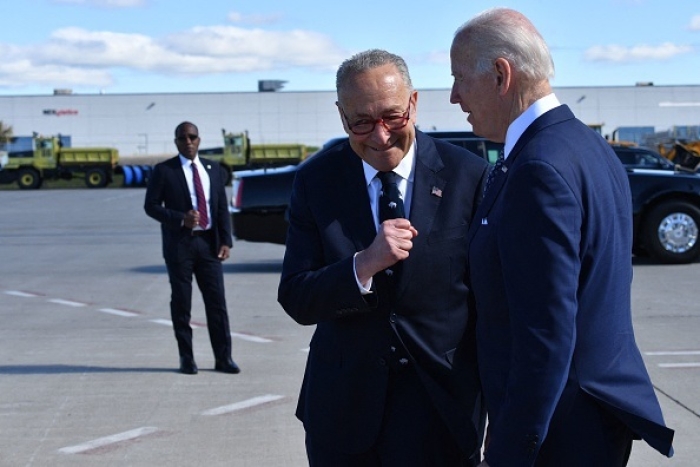 (CNSNews.com) - Instead of blaming the very troubled teenager who opened fire on shoppers in Buffalo, deliberately targeting them because of their race; and instead of blaming the adults who knew there was something wrong with the kid but failed to get him help; the top Democrat in Congress instead is blaming Fox News and, implicitly, Tucker Carlson for the violence.

In a letter to Fox News obtained by liberal media outlets, Schumer implored Fox News "to immediately cease all dissemination of false white nationalist, far-right conspiracy theories on your network."

Schumer explained it this way: "Proponents of this white nationalist, far-right conspiracy theory believe that a complicit or cooperative class of elites are advancing a plot designed to undermine the political power and culture of white Americans.

“For years, these types of beliefs have existed at the fringes of American life. However, this pernicious theory, which has no basis in fact, has been injected into the mainstream thanks in large part to a dangerous level of amplification by your network and its anchors."

Certainly, Fox News is among the leading critics of the Biden administration's failure and refusal to slow the record pace of illegal immigration. And Tucker Carlson has dealt with that failure on numerous occasions.

Carlson told his audience Tuesday night that he invited Schumer to come on his show to discuss Schumer's complaint that Fox News is responsible for the rhetoric that inspires mass murder.

"We wanted to hear more from Chuck Schumer about this. We invited him on the show tonight, as we always do, but because he is a coward, this is the only media appearance probably in history he's turned down," Carlson said. 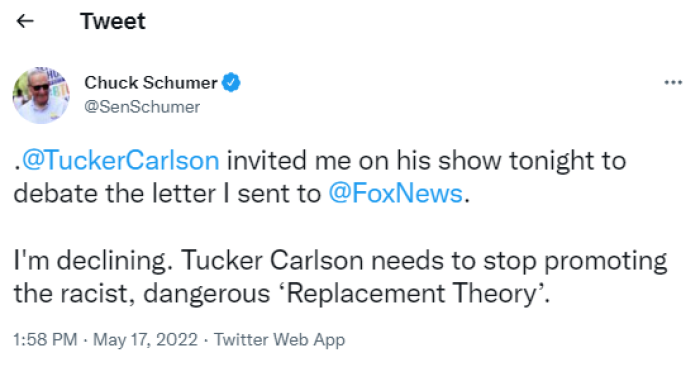 Tucker Carlson on Tuesday night noted that Americans are suddenly hearing a lot about the "great replacement theory" -- which actually figures in Democrat politics, he noted, as Democrats seek to cement their political power by flooding the country with illegal immigrants who are presumed to be future Democrat voters.

"So you can play clips of them saying it, and you're the deranged conspiracy nut!" Carlson said.

Carlson noted that leftists in politics and the media have been bragging about the nation's changing demographics "for decades," yet they demonize Carlson and anyone else who dares to criticize their destructive border policies.

In Buffalo on Tuesday, President Biden condemned those who "radicalize" lost souls:

"What happened here is simple and straightforward: terrorism.  Terrorism.  Domestic terrorism.  Violence inflicted in the service of hate and a vicious thirst for power that defines one group of people being inherently inferior to any other group.

"A hate that through the media and politics, the Internet, has radicalized angry, alienated, lost, and isolated individuals into falsely believing that they will be replaced — that's the word, “replaced” — by the 'other' — by people who don’t look like them and who are therefore, in a perverse ideology that they possess and being fed, lesser beings.

Carlson questioned who's to blame for angry and alienated young people: "So you lock the country down, lock kids out of their schools for two years, force them to get 'educated' on the Internet, but it is someone else's fault that they are alienated?" he asked.

Carlson said Biden went to Buffalo to blame his political opponents for a crime committed by a young man with a "diseased brain."

The signs of trouble were all there, Carlson noted. "So how did the adults around him let this happen?" he asked.

"In a country with functioning leadership, we would be asking that question. The signs of mental illness were certainly there. The people in charge missed those signs or didn't take them seriously enough, weren't paying close enough attention. In any case, they didn't fix it, they let a killer slip through. So what did they do wrong with Payton Gendron and how can we learn from it?

"We should learn from it if we want to prevent more mass murders. But that's not at all what our leaders are asking tonight, hardly. Instead, they are asking the only question that ever occurs to them: How exactly can I benefit from this? How can I leverage this tragedy to my advantage? How can other people suffering make me more powerful? It didn't take long for Joe Biden to find a way..."

Sen. Tom Cotton issued two tweets regarding Schumer's vilification of Fox News, saying, "Chuck Schumer’s motivations are political—he wants to distract Americans from everything the Democrats have mismanaged: from inflation to baby formula to Title 42 to the crime wave. The list goes on."

And: "The Waukesha mass murderer, the NYC subway shooter, the Congressional baseball practice shooter—Did Chuck Schumer blame left-wing media? Of course not. This is just politics."