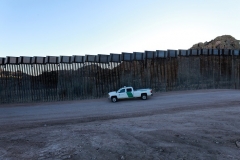 President Trump's border wall was still under construction on January 12, 2021, as seen in Sasabe, Arizona. (Photo by Micah Garen/Getty Images)

Well, Maria, I think what concerns me the most is, as we continue to respond to a global pandemic on COVID-19 and an economic crisis, trying to get millions of Americans back to work, I'm afraid that some of the actions that President Biden and the administration has taken is actually going to cause an immigration and border security crisis on our Southwest Border.

And that's something that we don't need right now. And it's really what I'm watching through these executive actions and through legislation that he's also pushing as well. So, a number of these things concern me.

The Department has done a good job over the last several months of keeping increased number of folks coming to the border illegally under control. And we have done that through a variety of different authorities. And now we see a rollback of some of those authorities. So, it really is concerning.

Among other actions, Biden has stopped funding for Trump's border wall; he has ordered a 100-day halt to the removal of illegal aliens found in the interior of the country; and he is proposing an immigration reform bill that would offer millions of illegal aliens currently in the country an eight-year path to citizenship.

Wolf said he has three questions about Biden's effort to relax immigration policies:

They have gone through their due process. They have gone to an immigration judge in some cases, and they have that final order of removal. And what the Biden administration is saying is, we are not going to deport them because we're going to focus on other things, and, again, very, very concerning.

They're moving resources to the border to process immigration, to process asylum claims. I think, in a COVID-like environment, that's very dangerous. Again, the department was on a path to return individuals within about two hours of them coming over the border. I hope that continues.

I hope that the Biden administration understands not only the border security, the real concerns and threats there, but also how that works within a COVID environment. So, a number of these things are concerning.

The men and women of the Border Patrol, if you go down and visit them -- I'm not sure if she's ever been to the border or not -- they will say, first and foremost, they need an effective border wall system. They need that impedance and denial for them to do their job.

They need the access roads, they need the cameras, they need the lighting, they need the fiber optic cables, they need that entire package for them to do their jobs. And we have said -- or I would say, the last administration, when I was at DHS, said over and over again, we do not need a border wall system on every…mile of that border. We need it in strategic locations. And that's what CBP has done.

I know the Biden administration is pushing more technology at ports of entry. I welcome that. But to just scrap the entire border wall system as ineffective just ignores the reality and the facts on the ground.

Also See:
Head of Border Patrol Union: 'There Is Absolutely Reason to Be Concerned' About Border Security
Biden's DHS Nominee Won't Say If Economic Improvement Is a Valid Asylum Claim