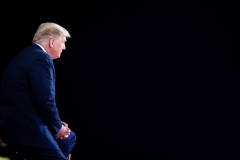 (CNSNews.com) – “A lot of people have asked you, will you accept a peaceful transfer of power…Will you accept the results of the election?"

That was one of the many predictable questions posed to President Trump Thursday night by NBC's Savannah Guthrie:

"I absolutely want that," Trump said. "But ideally, I don't want a transfer, because I want to win."

Trump indicated that the 2016 transition was anything but "peaceful":

And the answer is, yes, I will. But I want it to be an honest election, and so does everybody else. When I see thousands of ballots dumped in a garbage can and they happen to have my name on it, I'm not happy about it.

Guthrie argued, "There is in fact no evidence of widespread fraud, and you are so in doubt about our democracy."

"How can you say that?” Trump asked Guthrie. “You do read newspapers and you do watch the news," Trump responded. "Because every day they're talking about ballots that are corrupt, that are fraudulent."

Trump noted that "you can win a race, take a look at me, by 1 percent," meaning that ballot fraud could tip the election.

"But why are you laying the groundwork for that right now?" Guthrie asked.

"You know what -- I don't want that to happen, Savannah, I want it to be clean. I really think I'm going to win, but I want this to be clean. But it's sort of ironic that you and them talk about the peaceful transfer when I spent three-and-a-half years fighting off these maniacs, and now it turns out, everything's there, that they were the ones that dealt with Russia, and it's too bad.

"Peaceful transfer, I absolutely want that. But ideally, I don't want a transfer, because I want to win."

"Your words will probably reassure some folks," Guthrie said, turning to an audience member who asked a hostile question about Trump's response to coronavirus, to wit: "Why did you only put in place a travel ban from China and not put in place other measures mitigating the spread of COVID-19, potentially saving tens of thousands of American lives?"