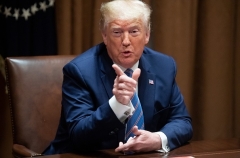 (CNSNews.com) - President Trump is warning trouble-makers to stay away from his Saturday rally in Tulsa:

"Any protesters, anarchists, agitators, looters or lowlifes who are going to Oklahoma please understand, you will not be treated like you have been in New York, Seattle, or Minneapolis. It will be a much different scene!" Trump tweeted Friday morning.

Crowds of rally-goers already are lining up to get a seat, and the president took note of that, tweeting: "Big crowds and lines already forming in Tulsa. My campaign hasn’t started yet. It starts on Saturday night in Oklahoma!"

The mayor of Tulsa has imposed a 10 p.m. to 6 a.m. curfew both Friday and Saturday nights to help police manage the anticipated protests.

In a flurry of recent tweets, Trump blasted a "phony poll" from Fox News showing him trailing Joe Biden by double-digits: "Watch what happens in November," he said, adding, "Fox is terrible."

Trump also indicated that his administration will provide a fuller explanation for its recission of DACA, as the Supreme Court said he has the authority to do:

"The Supreme Court asked us to resubmit on DACA, nothing was lost or won. They “punted”, much like in a football game (where hopefully they would stand for our great American Flag). We will be submitting enhanced papers shortly in order to properly fulfil the Supreme Court’s......ruling & request of yesterday. I have wanted to take care of DACA recipients better than the Do Nothing Democrats, but for two years they refused to negotiate - They have abandoned DACA. Based on the decision the Dems can’t make DACA citizens. They gained nothing!"

And on the topic of the Supreme Court, Trump said on Thursday, "I will be releasing a new list of Conservative Supreme Court Justice nominees, which may include some, or many of those already on the list, by September 1, 2020. If given the opportunity, I will only choose from this list, as in the past, a Conservative Supreme Court Justice…Based on decisions being rendered now, this list is more important than ever before (Second Amendment, Right to Life, Religous Liberty, etc.) – VOTE 2020!"

President Trump has often touted his Supreme Court picks on the campaign trail, but on Monday, the court released an opinion written by Trump-appointee Neil Gorsuch that stunned conservatives.

Gorsuch joined with liberals in ruling that an employer who fires someone merely for being gay or transgender violates Title VII of the Civil Rights Act of 1964. The ruling expanded the definition of "sex" in the 1964 law to include "gender identity."