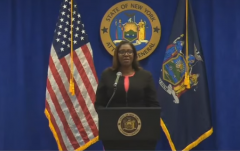 (CNSNews.com) - "It's a very terrible thing that just happened," President Donald Trump said on Thursday, after hearing about the lawsuit filed by New York Attorney General Letitia James against the National Rifle Association.

"This has been going on for a long time," Trump said, referring to New York's vendetta against the NRA. "They've been absolutely decimated by the cost of that lawsuit."

And that is the point of the lawsuit -- to shut down the NRA, which was chartered as a not-for-profit, charitable membership corporation in New York in 1871 and has long been a target of liberal Americans.

The lawsuit states that Attorney General Letitia James is responsible for overseeing the activities of New York not-for-profit corporations and the conduct of their officers and directors, and it is in that capacity that her office is suing.

She wants the court to find that the NRA should be "dissolved" based on its "pattern of conducting business in a persistently fraudulent or illegal manner." The lawsuit says NRA Chief Executive Officer Wayne LaPierre has "exploited the organization for his financial benefit, and the benefit of a close circle of NRA staff, board members, and vendors."

"The effect has been to divert millions of dollars away from the charitable mission, imposing substantial reductions in its expenditures for core program services, including gun safety, education, training, member services and public affairs."

The lawsuit also seeks LaPierre's removal, and it says he and three other defendants should "make restitution and pay all penalties resulting from the breach of fiduciary duties and their misuse of charitable assets for their own benefit and interests."

The NRA issued a statement reacting to the lawsuit:

This was a baseless, premeditated attack on our organization and the Second Amendment freedoms it fights to defend. You could have set your watch by it: the investigation was going to reach its crescendo as we move into the 2020 election cycle. It’s a transparent attempt to score political points and attack the leading voice in opposition to the leftist agenda. This has been a power grab by a political opportunist – a desperate move that is part of a rank political vendetta. Our members won’t be intimidated or bullied in their defense of political and constitutional freedom.

As evidenced by the lawsuit filed by the NRA today against the NY AG, we not only will not shrink from this fight – we will confront it and prevail.

"This is an unconstitutional, premeditated attack aiming to dismantle and destroy the NRA – the fiercest defender of America’s freedom at the ballot box for decades. The NRA is well governed, financially solvent, and committed to good governance. We’re ready for the fight. Bring it on.”

The NRA is now counter-suing the Attorney General: "There can be no doubt that the James’s actions against the NRA are motivated and substantially caused by her hostility toward the NRA’s political advocacy,” the group argues.

Rep. Guy Reschenthaler (R-Pa.) is among the many NRA defenders reacting on Twitter:

"The NY AG attacking the NRA is a classic example of Democrat elected officials putting politics above policy simply to appease their liberal base. The NY AG should be focused on going after criminals & combat the skyrocketing crime rate in NYC, instead of appeasing the far left," he wrote.