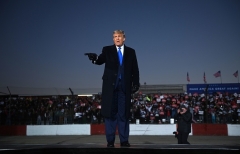 (CNSNews.com) - "It took generations to build the America that we know and love, but if the radical left gained power, it would take them only a matter of months to burn it down, tear it down or destroy it," President Trump told a campaign rally in West Salem, Wisconsin on Tuesday -- one of three rallies he held on Tuesday alone.

He said one of the most important issues in the 2020 election is law and order. "I'm the only one standing between you and the left-wing mob, I hate to tell you, there aren't too many of us," he said.

Trump pointed to the rioting and looting that erupted Monday night in Philadelphia and continued on Tuesday night after he spoke:

The Biden-Harris plan would end cash bail...so everyone just walks around, no matter what they do -- ends cash bail, freeing 400,000 dangerous criminals. It would slash police budgets all over the country. It would tie the hands of every police officer in the country, and they would appoint anti-police prosecutors in every community in America. I don't think that's for Wisconsin -- we know each other well.

“Biden is soft and weak and too scared to be pres--he doesn't want to be president let's face it," Trump said, pointing to Biden's "bad body language" and his reluctance to leave his Delaware home.

While Trump barnstorms the country, the Biden campaign in recent weeks has called a "lid" on Biden's public appearances, telling reporters on many days there won't be any.

(The audience interrupted with chants of "four more years.")

"And unlike Biden, who's made a fortune in politics -- what a fortune -- the press is not allowed to write about that, though, but Biden made a fortune. You know what, this has cost me billions of dollars, and you know I could not be happier, because we have done things that nobody else could have done in the first three-and-a half years."

Trump touted his support for the military, veterans, reductions in regulation and taxes. Then he took on Sen. Kamala Harris (D-Calif.):

"Biden's running mate, the most liberal member in the U.S. Senate, she makes Bernie Sanders look like he’s a conservative. Even urged their supporters to donate to a fund to bail out rioters in Minneapolis where they had such problems until the National Guard went in and they stopped it."

Trump said Biden-Harris policies would "set cop-killers free. We believe if you murder a police officer you should get the death penalty."

Democrat Joe Biden, campaigning in Georgia on Tuesday, did not specifically mention law enforcement, but he did say, "Black lives matter."

He does--he doesn't believe that systemic racism is a problem and he won't say ‘Black lives matter,’ because they do. We know they matter.

That's why a season of protest has broken out all across the nation. Protesting though is not burning and looting. Violence can never be a tactic a--or tolerated, and it won't, but much of it is a cry for justice from a community that has long had the knees of injustice on their necks.

The names of George Floyd, Breonna Taylor, Jacob Lake will not soon be forgotten, not by me, not by us, not by this country.