Trump: 'I'll Tell You Who Is Meddling in Our Elections. The Democrats...' 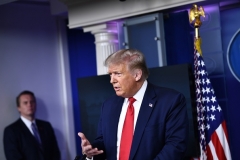 President Donald Trump speaks to the press in the Brady Briefing Room of the White House. (Photo by BRENDAN SMIALOWSKI/AFP via Getty Images)

(CNSNews.com) - Twice at his Monday afternoon news conference, President Donald Trump warned about the Democrats' push for voting by mail in the November election.

Asked about the recent intelligence assessment that Russia, China and Iran are interfering, or attempting to interfere, in the November election, President Trump told reporters to look closer to home:

Look, the other with day, they said the three countries. They said China and Russia and Iran. And some reporter got up and said Russia is meddling. I said, well, didn't it mention China and Iran? Why didn't you mentioned them, too? So, I don't know.

You know what I'm telling you? I'll tell you is meddling in our elections. The Democrats are meddling by wanting and insisting on sending mail-in ballots where there's corruption all over the place.

If you check what happened in New York, a small--relatively small race with Carolyn Maloney. And they called her the winner the other day because I was mentioning it at conferences and getting a lot of action on that statement. So, they called her--they declared her the winner. And they have no idea who won. And the person--her opponent is very angry.

But they had mail-in voting. And they had hundreds, and I think even thousands of ballots that are missing, that were fraudulent. Take a look at the Carolyn Maloney race. Take a look at Patterson, New Jersey. Take a look now at this one in Virginia where they mailed out 500,000 applications. And they're going to people that aren't supposed to be getting an application.

Trump began the news conference by talking about the situation in Virginia, where a third party group recently mailed more than half a million absentee ballot applications to Virginia residents in multiple localities. The pre-paid envelopes included with the unsolicited applications was addressed to the incorrect registrar's office.

The Virginia Department of Elections said it has no affiliation with the group behind the mailing. It also said applications mailed to the wrong registrar’s office will be forwarded to the correct office. Virginia voters may request absentee ballots online.

Trump told the news conference that coronavirus should not prevent people from voting in person, as they did in World War I and World War II:

I thought I would start by talking about some mail-in voting that just was revealed, just the news, half a million incorrect absentee ballot applications were sent all across the state of Virginia, including to many dead people. This was an unprecedented mailing flub that has heightened concerns about the integrity of expanding mail-in voting and mail-in voting efforts. It is a disaster all over Virginia, half a million votes, so that's something you have to think about.

We don't want to have a rigged election. I know that. And you have to be very careful when you mention, as you constantly do, Russia or you mention China, or you mention Iran or others that attack our election system. And when you have this mail-in voting, it's a--it's very susceptible. This is something that can be easily attacked by foreign countries and by, frankly, Democrats and by Republicans, and I think that it's something you have to start thinking about very seriously.

Our system is not equipped for it. The post office is not equipped for it, and people should vote like they did in World War I and World War II and your numbers will be--in 90 days or less, your numbers will be very good, I think, much better on the coronavirus or the China virus, but it's something you have to look about--look at and say this is just crazy.