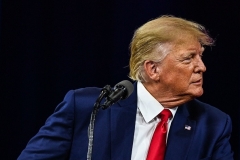 In a Monday interview with Fox Business host Stuart Varney, Trump said he knows exactly what he would do to stop the war: The answer lies "under our feet," he said.

"You know the expression, what you need for war is three things, money, money, and money. And if you bring down the price of oil -- and you could knock the hell out of the price, I had it down to $1.71 at one point. In fact, it was so low that I was afraid we were going to lose our oil companies.

"You got to get that oil down. And if you get the oil down, that war is going to end," he repeated.

Varney pressed Trump on "what extra military help you would give to the Ukrainians. You say you want to do more than just the MiG jets or the Javelins."

"Well, I think the drones are just as effective as anything nowadays," Trump said.

"I mean, they make drones today -- we make, we have drones that are just as effective as just about anything in the air, anything you can do in the air, and you can do drones. Plus, they give back tremendous amounts of information, and the information leads missiles right to whatever the hell target they are.

"And you don't have to shoot them from Ukraine, so therefore, you are being neutral."

Varney asked Trump how long he thinks it would take to return the United States to "energy independence and dominance."

"We became energy independent when I was president. First time ever," Trump said. "And that involved a lot. But what nobody really understood was we were going to be double the size of Saudi Arabia and Russia combined. Much bigger than both combined.

"And OPEC was -- you never even heard the term OPEC during my administration. Nobody talked about it. It was dead. And now, OPEC is telling us, they're dictating the terms, and we're going begging to OPEC for oil. It's so ridiculous."

Trump ridiculed the "the radical left, the crazies," for perpetrating a "climate hoax."

"In my opinion, you have a thing called weather, and you go up, and you go down," Trump said.  If you look into the 1920s, they were talking about a global freezing, OK? In other words, the globe was going to freeze. And then they go global warming. Then they couldn't use that because the temperatures were actually quite cool. And many different things.

"So, now they just talk about climate change. The climate's always been changing."

"It's called clean coal, we have so many things that we're sitting on top of, I call it liquid gold. And our liquid gold makes us more than competitive, because China doesn't have that -- they have to go and buy everything.

"We have it under our feet, and we don't want to use it, because these people -- it's not that we don't want to, I think a majority -- a vast majority of our nation does. But some crazies don't, and they make it very, very difficult. And they make us non-competitive as a nation."