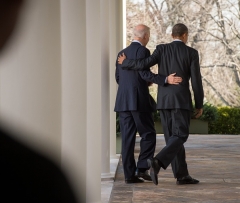 (CNSNews.com) - "You know, Joe, I ran because of you. I ran because of Barack Obama, because you did a poor job," President Trump told his Democrat rival Joe Biden at Thursday's final debate.

Biden responded by steering the conversation away from Biden's record on crime to "character."

That gave Trump an opening to bring up the Biden family's alleged business dealings in Ukraine and China:

"If this stuff is true about Russia, Ukraine, China, other countries, Iraq," Trump said. "If this is true, then he’s a corrupt politician. So don’t give me the stuff about how you’re this innocent baby."

Those comments came in response to a segment on "race in America."

The fact of the matter is, there is institutional racism in America. And we have always said, we’ve never lived up to it, that we hold these truths to be self-evident, all men and women are created equal. Well, guess what, we have never, ever lived up to it. But we’ve always constantly been moving the needle further and further to inclusion, not exclusion.

This is the first president to come along and says, that’s the end of that. We’re not going to do that anymore. We have to provide for economic opportunity, better education, better healthcare, better access to schooling, better access to opportunity to borrow money to start businesses, all the things we can do. And I’ve laid out a clear plan as to how to do those things just to give people a shot. It’s about accumulating the ability to have wealth as well as it is to be free from violence.

To which Donald Trump responded:

Biden denied calling anyone "super-predators." (He called them "predators.") Then he defended the Obama-Biden record, noting that "we commuted over 1,000 people's sentences" and reduced the prison population by 38,000 people: