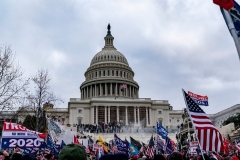 Trump supporters at the U.S. Capitol on Jan. 6, 2021. (Photo by Alex Edelman/AFP via Getty Images)

(CNSNews.com) - David Schoen, the attorney representing former President Donald Trump at his impeachment trial, said the trial is an "unlawful" proceeding and "a complete rush to judgment" before all the evidence is produced.

"We are now six days away from this trial," Schoen told Fox's Lou Dobbs on Wednesday:

We have absolutely no guidance as to the rules that will apply. We know it's a free-for-all in there with no rules of evidence, but we don't know yet whether they intend to call witnesses, how much time is going to be given to the sides - nothing about this thing. And it's really incredible.

But this is why they want this proceeding to go on now, because - especially before the evidence comes in. This is a complete rush to judgment.

Everyone in the country now knows that the evidence is developing -- that the -- what happened at the Capitol was pre-planned. More and more evidence comes out every day. They want to rush this thing to trial before the evidence really comes out. That's not the American way.

Schoen said the Senate has "absolutely no jurisdiction to conduct these proceedings - they're unlawful proceedings. The Constitution is quite clear on the issue," he continued:

"A number of scholars have debated the issue, but if you go to the language of the Constitution, it's clear that -- and everyone knows, the impeachment proceeding is intended for the removal (from) office of a sitting officer."

Although the House impeached Trump while he was a sitting president, "they held the articles until he was no longer president."

"There's absolutely no jurisdiction in the Senate to try former President Trump than there is any other citizen in the country. And I would suggest to you that, if you think any citizen in the country ought to be hauled off the street and brought before the Senate for a trial -- a trial, by the way, lacking in all due process, then we've got a very sad situation -- dangerous situation in this country."

Schoen said the trial, set to begin next week, "is simply the partisan, political weaponization of the impeachment process, contrary to the Constitution."

Last month, the Senate voted 55-45 against a Republican move to dismiss the second Trump impeachment as unconstitutional, but Schoen said he hopes that will change:

"I hope that when we argue jurisdiction in this case, more votes will come in recognizing that there simply is no jurisdiction. This country needs to move on," Schoen said.