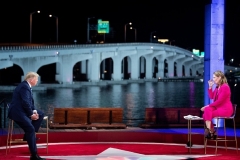 (CNSNews.com) - In an attempt to "clear up" a few things from the Trump-Biden debate, NBC's Savannah Guthrie on Thursday told President Trump, "You were asked point-blank to denounce white supremacy. In the moment, you didn't."

(He did, answering "sure" to the question.)

"A couple of days later, on a different show, you denounced white supremacy," Guthrie continued.

Trump interrupted: "No, you always do this. You’ve done this to me, and everybody --I denounce white supremacy, okay? "

"It feels sometimes you're hesitant to do so," Guthrie said.

"Here we go again," Trump said. "Every time, in fact, my people came -- I'm sure they'll ask you the white supremacy question. I denounce white supremacy. And frankly, you want to know something, I denounce Antifa and I denounce these people on the left that are burning down our cities that are run by Democrats.

Guthrie told Trump, "While we're denouncing, let me ask you about QAnon. It is this theory that Democrats are a satanic pedophile ring and that you are the savior of that. Now can you just once and for all state that that is completely not true? And disavow QAnon in its entirety?”

"I know nothing about QAnon," Trump said.

"I just told you," Guthrie shot back.

"They believe it is a satanic cult run by the United States," Guthrie said.

"He may be right. I just don't know about QAnon," Trump said.

"You do know!"  Guthrie argued.

"But they’re not a satanic pedophile cult? You don't know that?" Guthrie asked Trump.

(Guthrie told Trump, "Because you're here before me," indicating that Biden wasn't present.)

"So cute," Trump said. "Antifa exists. They're vicious. They're violent. They kill people and they're burning down our cities, and they happen to be radical left."

Guthrie moved on to another topic intended to make Trump look like a conspiracy theorist, but having nothing to do with issues that are top of mind for Americans.