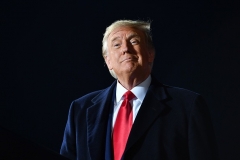 "The Democrat Party has been completely taken over by socialist, Marxist, and far-left extremists. They have raised the policies of Communist Cuba, socialist Venezuela, they want to end the American Dream for Hispanic Americans. We love Hispanic Americans."

Trump urged his supporters to "get out there."

"Don't let them bluff you. Whatever it is. Get out there and vote. The Republican Party is the party of jobs, freedom, and safety and we will ensure that America never becomes a socialist or a communist country."

Trump contrasted himself with the man he calls "Sleepy Joe."

"Joe Biden will deliver a crippling shutdown," he said.

"I'm delivering a safe vaccine, and we're doing a record recovery. This recovery is a record. They've never seen anything like it, and next year is going to be, I think, the best economic year in the history of our country. Unless a very sleepy guy got in and he decided to quadruple everybody's taxes. Then you can forget it."

"And we're doing it. We're rounding the turn. ...Under my leadership, prosperity will surge. Normal life. Oh, I love normal life! We want to get back to normal life -- will fully resume.

"The Florida tourism and hospitality industries will reach record highs. That's what's going to happen. You see it. And next year will be one of the greatest years. We are going to have, I'm telling you, mark it down.

Trump said the election is not only about jobs and the economy, it's about "law and order."

Trump said Biden is "weak as hell" on law and order.

"He surrendered his party to flag burners, rioters and anti-police radicals. The Democrat Party's war on police, you know? A lot of people say "cops." I never liked the word.

"You know my father -- sit down," Trump told a protester.

Trump said Biden and the Democrat Party are putting the lives of police officers in danger: