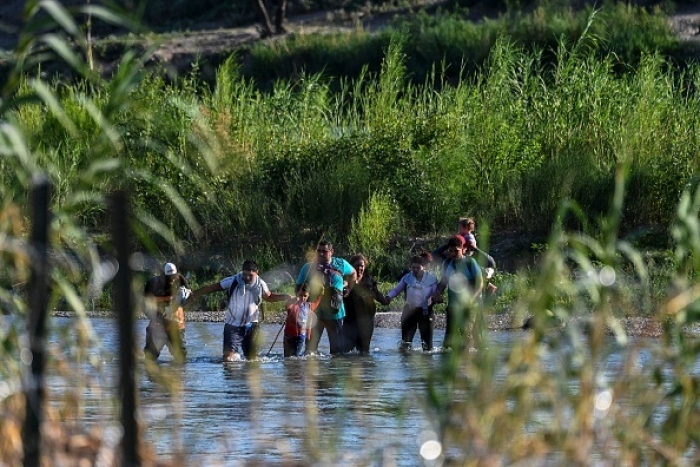 The House this week is expected to approve the so-called Inflation Reduction Act that Senate Democrats passed by one vote, 51-50, on Sunday.

The bill extends Obamacare subsidies, caps some prescription drug prices for Medicare patients, taxes corporations, and spends hundreds of billions of dollars on clean energy programs and incentives. And, as Sen. Ted Cruz noted on Sunday, "It doubles the size of the IRS."

"This is historically the worst illegal immigration has ever been," Fallon said.

"So it's about 10 times worse under Joe Biden, who has never visited the border. So I think we should run an express (bus) right to Nancy Pelosi's neighborhood in San Francisco, right to Joe Biden's beach house in Delaware, up to Chuck Schumer's mansion in New York and all of the other sanctuary cities that apparently want mass and unlawful migration. Because in Texas, we don't."

Texas Gov. Greg Abbott is running busloads of illegal immigrants to sanctuary cities such as New York and Washington, D.C., to demonstrate on a much smaller scale what lax federal border enforcement is forcing Texas to endure.

"The Democrats are making the IRS bigger than the Pentagon, plus the Department of State, plus the FBI, plus the Border Patrol. Combined, the IRS is going to be bigger,"  Cruz said.

Sen. Lindsey Graham (R-S.C.) told CNN's "State of the Union" that the new army of IRS agents will come after "waitresses, Uber drivers and everybody else to collect more taxes. So, if you think growing the IRS is good for you, you're wrong."

"I think the IRS is going to target the highest-income Americans," Blumenthal told "State of the Union."

"As the saying goes, that's where the money is. That's where they're going to look to collect. The idea that there's going to be this army of IRS agents defending -- descending on the average American is just preposterous. Tax fairness is what we need."

"We're still going to have a problem there. And yet at the same time, they're going to be collecting about -- real close to $740 billion in new tax revenue over the next supposedly 5 to 10 years, but most certainly it's not going to help get us through a tight time in which we're worried about coming out of a recession.

"We've got two quarters in a row with declining GDP. This is not the time to raise taxes, and most certainly it's not the time in which we start adding additional government employees. We're talking 87,000 more IRS employees. I don't think very many American citizens are going to want to see that."