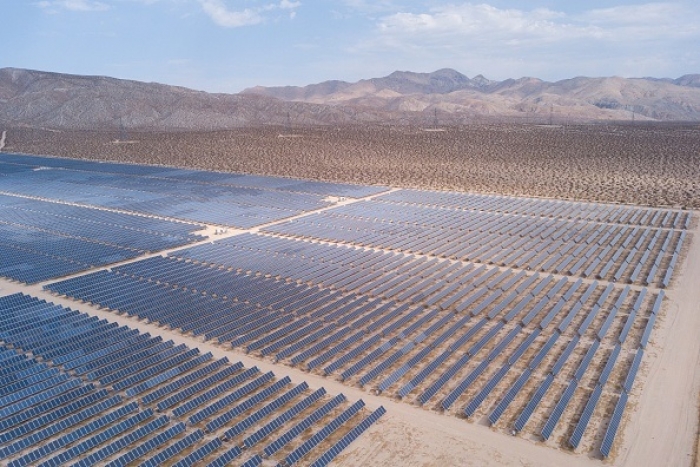 An aerial image of solar panels at an electricity generation plant in Kern County near Mojave, California. (Photo by PATRICK T. FALLON/AFP via Getty Images)

(CNSNews.com) - "Yes, we're going to have power outages all across the country" this summer, Sen. John Barrasso (R-Wyo.) said on Sunday.

"And, specifically, California is going to be hit the worst. And the president, once again, has been advised to this. But he is missing it, just like he did with baby formula shortages.

Barrasso said the United States needs to boost its oil and gas production. But on Monday, the Biden administration pushed ahead with its clean-climate dreams.

The White House announced that President Biden has authorized the use of the Defense Production Act "to accelerate domestic production of clean energy technologies," including solar panel parts, building insulation, heat pumps, and more.

But -- while domestic clean energy is ramping up, the U.S. needs a "bridge" to get there. "We need to boost short-term solar panel supply to support construction projects in the United States right now," said the fact sheet.

So President Biden also announced "the temporary, duty-free importation of solar cells and modules from Southeast Asia to avoid disruptions to the electric power system," as the Commerce Department described it.

According to the White House, "President Biden is using his powers to create a 24-month bridge for certain solar imports."

The president will allow U.S. solar companies obtain solar modules and cells from Cambodia, Malaysia, Thailand, and Vietnam free of certain duties for two years "in order to ensure the U.S. has access to a sufficient supply of solar modules to meet electricity generation needs while domestic manufacturing scales up."

In reaction, the Commerce Secretary Gina Raimondo noted that the drought in the western U.S. and the Russian invasion of Ukraine "have placed increasing strains on America’s energy market," making solar energy "an essential component of diversifying U.S. energy sources" and "responding to the climate crisis."

Assistant Secretary of Commerce Lisa Wang also released a statement, noting that President Biden "has declared an emergency with respect to the inadequate supply of solar cells and modules."

"In accordance with the President’s declaration, no solar cells or modules imported from Cambodia, Malaysia, Thailand, and Vietnam will be subject to new anti-dumping or countervailing duties during the period of the emergency. Existing duties on Chinese and Taiwanese imports of solar cells and modules remain in effect,” Wang said.

Sen. Barrasso recommended that instead of buying an electric car, "I'd say you better buy an electric generator, if you could do and afford that, because his (Biden's) focus on wind and solar, those are good, but it's not always there when you need it. He said we need more energy transmission lines. I say we need more energy to transmit along those lines."

Barrasso said Biden's policies have led to "less reliable" U.S. energy. "And what we're seeing with these blackouts this summer is the price people are going to have to pay, specifically in California, for signing up for the Green New Deal."