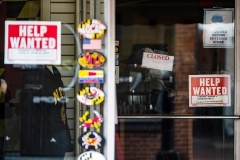 A sign of the times in Annapolis, Maryland, as seen on May 12, 2021. (Photo by JIM WATSON/AFP via Getty Images)

The program runs through the week ending September 4, but already, more than half of the states have ended it early, saying it's contributing to a shortage of willing workers in businesses that are desperate to hire. That's because some people are earning more with the expanded unemployment benefits than they did at their pre-COVID jobs.

At a hearing of the House Education and Labor Committee on Wednesday, Walsh said, "I do not feel that the $300 bonus is keeping people out of work." Walsh said he thinks health concerns are keeping some people home and some industries closed. Walsh also mentioned "inefficiencies that we have to deal with," such as childcare and school closures.

Rep. Elise Stefanik (R-N.Y.) pointed to a recent report from the University of Chicago that says 42 percent of American workers are earning more through unemployment insurance than they are making in their pre-pandemic jobs. I'm hearing from small businesses and manufacturers all across my district and all across the country who are absolutely desperate to fill these vacant job openings."

"No state has done it yet," Walsh replied. "They've only--they've only mentioned it, but no one has actually...taken that action."

"Well, when they do that, will that data be collected?" Stefanik asked.

"I'm assuming--I--I--well, I can--I look at it and see if it is," Walsh said. "The unemployment extension runs out in September, so I'm not sure when they're going to take action on it."

"Great, so, that's not my question," Stefanik said. "My question is, will the department collect that data?"

"Of course. I--I said at the beginning of this I would look into it," Walsh said.

"Okay, great," Stefanik said. "So, I'll take that as a yes, that they will look into the data so we can see the comparison, because my bet, and you talk to any small businesses, I bet we're going to see much stronger job growth and states that wind down than in states that don't."

Earlier, Rep. Tim Walberg (R-Mich.) asked Walsh: "Given the plunge in COVID-19 cases, the unprecedented challenges businesses of all sizes are experiencing in my district, in many other places, is it time for this federal emergency employment insurance to be immediately terminated?"