Sens. Grassley, Johnson: 'It Is a Fair Question' to Ask If Joe Biden Is Compromised by His Son's Business Dealings 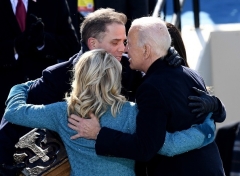 President Joe Biden hugs his son Hunter Biden his wife after being sworn in as the 46th President, on January 20, 2021. (Photo by OLIVIER DOULIERY/AFP via Getty Images)

(CNSNews.com) - "We told you Hunter Biden’s laptop was legit," Republicans on the House Judiciary Committee tweeted on Wednesday. "The media told you it wasn't. They lied to you. Don't forget."

That tweet follows recent reports in both The New York Times and The Washington Post confirming that the emails found on a laptop left in a Delaware repair shop really are Hunter Biden's -- as The New York Post reported before the 2020 presidential election.

"A Justice Department investigation into Hunter Biden’s business activities has gained steam in recent months, with a flurry of witnesses providing testimony to federal investigators and more expected to provide interviews in the coming weeks, according to multiple sources familiar with the matter.

"The probe, led by the US Attorney in Wilmington, Delaware, began as early as 2018 and concerns multiple financial and business activities in foreign countries dating to when Biden’s father was vice president. Investigators have examined whether Hunter Biden and some of his associates violated money laundering, tax and foreign lobbying laws, as well as firearm and other regulations, multiple sources said."

Two Republican senators -- Chuck Grassley of Iowa and Ron Johnson of Wisconsin -- have conducted multi-year investigations into allegations that Joe Biden's troubled son Hunter used his father's name and position as vice president to enrich himself and his family.

Democrats and their corporate media allies, until now, have dismissed those allegations as Russian disinformation. And even now, as the liberal media finally admit that the laptop and emails are Hunter's, and that Hunter is being investigated, they continue to report that this has nothing to do with Joe Biden, now the president.

On Wednesday night, Grassley and Johnson told Fox News's Sean Hannity it is "fair" to ask if President Biden is compromised because of his son's activities in Russia and China:

"It is a fair question and it's a question with me, but every American ought to keep it in the back of his mind, particularly as our government is dealing with the Chinese government, our number one competitor in the world and the number two economy in the world, and I think it's legitimate to raise that question," Grassley said.

"I wish I could say absolutely yes. But for somebody to say that over the years...the eight years of being vice president and also then of being out of office but still having the Biden name and the prestige of that, that you never talked (about) this with your family. That's like my son and I are in farming. We talk about farming all the time."

In November 2020, Johnson and Grassley issued a report alleging that Hunter Biden traded on the family name -- and that his father knew about it and may have profited from it, although Biden has previously stated that he never discussed his son's business with Hunter.

Johnson tweeted on Wednesday, "Hunter Biden’s company received $1 million from CEFC, a company that was effectively an arm of the communist Chinese regime." He also released the record that proves the money transaction.

"This is an enormous tangled web, you know, a vast web of foreign entanglements and we've known this all along," Johnson said. "And as Tony Bobulinsky said, Joe Biden is compromised...he cancels the Nordstream 2 pipeline, he canceled the China initiative, which is a DOJ investigation into universities of Chinese stealing our intellectual property. So this is incredibly dirty, but the mainstream media has been complicit, covering it up."

"We may not know all the details," Johnson said. "But I tell you who does. Russian intelligence, Chinese intelligence, Iranian intelligence, North Korean intelligence. My guess is that there are elements in our...intelligence community that know as well. They just aren't going to tell us. They won't tell the American public because there is corruption in the deep state."

Johnson said former CIA Director Gina Haspel wouldn't even return their phone calls to explain why she wouldn't respond to oversight requests. "It's very deep state, pervasive, it is filled with liberal leftists. That's one of our big problems with this country today."

Rep. Jim Jordan (R-Ohio) tweeted on Wednesday: "Do you think the media would give you a pass if you did what Hunter Biden did? Do you think the government would let you off the hook? We are tired of the double standard."

Grassley also issued a tweet: "If u weren’t paying attention for the past few yrs to the Grassley Johnson investigation into Hunter Biden & James Biden doing business w the communist Chinese govt ITS TIME TO GET A GRIP."