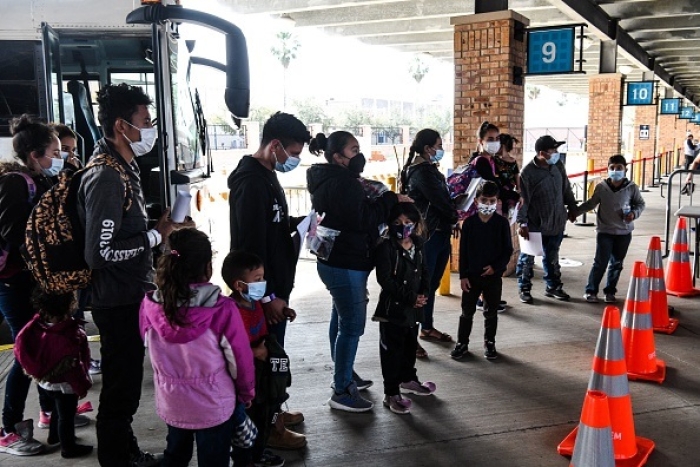 Migrants, mostly from Central America, are dropped off by the US Customs and Border Protection at a bus station near the Gateway International Bridge, in Brownsville, Texas. President Biden's pledge of a more humane approach has sparked a rush to the border. (Photo by CHANDAN KHANNA/AFP via Getty Images)

(CNSNews.com) - A dire warning on Sunday from Sen. Bill Hagerty of Tennessee, one of many Republicans who is urging the Biden administration not to lift Title 42 on May 23.

Title 42, imposed by the CDC, is a public health measure that currently bars entry of some, but certainly not all, would-be asylum-seekers:

“I was here Friday evening when they put together what they call the evening muster,” he said:

“The leadership came out to tell the Border Patrol agents that, indeed, the president of the United States decided to lift the Title 42. That's the last tool that they have left to send people back -- back across the border.

“There was just a complete cloud of depression that fell over the room, Maria. That's the last tool left. They're already overwhelmed. They have got capacity to process perhaps 5,000 coming across the border. They're now getting 7,000.

“This could go to 15,000, 18,000 overnight. In fact, what the president has done is send an invitation to come to America. May 23, the border is going to collapse. There's going to be a tidal wave coming across this border.

Hagerty said border agents have told him they won't be able to protect the border because they'll be "spending the entirety of their time processing paperwork, because, without Title 42, which can be handled in about 15 minutes, they have to go through a different process that takes an hour and 15 minutes.

“It'll take five times as many border agents to process the number of people coming across. It's going to be all paperwork, no border protection,” Hagerty said.

“The border is going to be open. I'm sure that the Chinese Communist Party is ramping up fentanyl production right now in China. They're shipping it to Mexico. The Mexican cartels are ramping up.

“There's going to be another flood of illegal drugs coming across the border, particularly after the 23rd of May.”

Hagerty said he brought mayors and sheriffs with him to the border, because they are dealing with the repercussions of illegal and deadly drugs every day:

"We're losing kids to overdoses every night and every day. The mayor of one of our smallest counties, Scott County, told me that she had 27 deaths due to overdoses in her county last year, 23 of them from fentanyl.

"The Chinese Communist Party's fingerprint is on every one of those deaths in my home state, Maria. They are waging war on us.

"But President Xi never agreed to stop sending it to Mexico. And when Joe Biden decided to collapse the border here, basically, he's opened the door for the Chinese Communist Party to again begin to wage war on America's youth. And that's exactly what's happening."