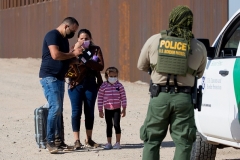 One of many illegal border crossings near Yuma, Ariz. (Photo by RINGO CHIU/AFP via Getty Images)

Graham said Biden should be impeached for failing to secure the United States:

“There's been a hundred percent increase in fentanyl seizures at the Yuma Sector alone. Our borders are completely open, they're porous. People are pouring in. Drugs are pouring in, and here's what I worry about, terrorists getting in the middle of this group and killing a bunch of us.”

Graham said the terrorists now roaming freely in Afghanistan may one day take advantage of the open southwest border -- "come here and kill a bunch of us if we don't change."

"Our men and women in the Border Patrol and I.C.E. are under siege. They are American heroes. You just would not believe what it's like to work along the border. I don't know how they do it, and they've been completely abandoned by President Biden, and he should be impeached over this.

“This is dereliction of duty, and a bunch of Americans are going to get killed if we don't change our policies quickly."

Graham was at the border in Yuma, Arizona recently, and he said it's not just impoverished Central Americans and Mexicans coming across.

"Here's what happens," he said:

People get a tourist visa in Brazil, upper middle-class, middle-class people, they fly to Cancun on a tourist visa. They get a bus or rent a car, drive to the U.S. border, get dropped off at the border with their luggage and they check in with the Border Patrol, turn themselves in to get released in the United States.

The Border Patrol agents in Yuma, Arizona are basically like hotel clerks for Brazilian immigrants who are not economically distressed. This is a scam. And it gets worse, there are 46,000 from Brazil this year alone.

We want to send them back, and the Brazilian government won't take their own citizens, unless they're vaccinated or get a negative COVID test. You can't make this up.

Graham said the Brazilians, unlike most border crossers, are wealthy and well-dressed.

What pisses the Border Patrol off is they are having to process these people. That means they can't be out there getting drug dealers and terrorists coming across the border. They're spending all their time acting as hotel clerks for, you know well-off Brazilians who are scamming and playing a game.

They've got better luggage than I do. When we went through the processing station, these were upscale luggage. No dirt on their shoes. They fly into Cancun. They rent a car or a bus, dropped off at the border, get their luggage out, find the first Border Patrol agent they can find, turn themselves in and before they do that, they book a flight to a friend or relative already in the United States.

This is offensive. It’s a bunch of bullshit, and it needs to stop.