Sen. Cruz: 'We Have Robust Political Speech. People Are Entitled to Be Idiots' 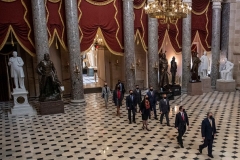 The House Sergeant of Arms escorts House impeachment managers to the Senate floor for the start of the trial of former President Donald Trump on February 9, 2021. (Photo by ERIC BARADAT/AFP via Getty Images)

Cruz called the trial “political theater” – a chance for Democrats to be seen “pounding the table…moralizing and…venting their hatred for Donald Trump.”

But the honest answer is, none of them meet incitement. You know, we have the First Amendment, we have robust political speech. People are entitled to be idiots. And, you know what? In the United States Congress, we get a lot of people doing that.

Cruz agrees with many people on the right and on the left who say the Senate trial will end with acquittal -- a complete waste of time.

“But this is political theater, because rather than address the real problems, the real challenges we have in this country, rather than focused on getting kids back in school and getting tens of millions of Americans back to work, the Democrats want a week of just political theater raging at Donald Trump.”

Cruz said although Trump's language can sometimes be "overheated," it's not over the line.

And when it comes to encouraging violence, you noted quite rightly that the president was careful to say that the protesters should be peaceful. We have had Democrats for a year cheering on, we've seen violence all over the country, we've seen riots all over the country, we've seen stores being looted, stores being firebombed, police cars being firebombed, police officers being assaulted, police officers being murdered, individual citizens being assaulted, and what did the Democrats do? They cheered it on. They celebrated.

In fact, Kamala Harris, our new vice president, Kamala Harris not only encouraged they keep at it and keep doing more, she raised money to pay for the bail to bail out the violent criminals.

The difference is, you and I have been consistent in that. We said if you're engaged in violence, whether you're left-wing or right wing, that's unacceptable. The Democrats have been complete hypocrites on this, cheering on BLM and Antifa and apologizing for their violence, and the hypocrisy is really thick right now.