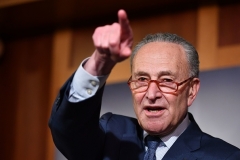 "Before the end of the month, the Senate will vote on crucial voting rights legislation. Republican state legislatures across the country are passing the most draconian voting restrictions since the beginning of Jim Crow, potentially disenfranchising tens of millions of Americans," Schumer claimed:

Congress must take action to defend our democracy. And we heard really moving testimony from five...Texas state lawmakers about the vicious, nasty, and bigoted attacks aimed at voting rights in their state.

These Texas Democrats bravely fought against voter suppression. They briefed our senators on what's happening in their state and why passing legislation is so important. They must have gotten five or six standing ovations.

We were really taken by their courage, their bravery, and most importantly, their mission, which is, we need to help Texas. We need to undo these awful laws and help Texas obtain a decent way of voting for all people. The discussion on our caucus is going to continue on this issue. We'll be holding a special caucus meeting later this week to continue discussing the best path for voting rights legislation.

So what's in the "awful" Texas bill SB7, titled, the "Election Integrity Protection Act of 2021"?

"The purpose of this Act is to exercise the legislature's constitutional authority under Section 4, Article VI, Texas Constitution, to make all laws necessary to detect and punish fraud and preserve the purity of the ballot box," the bill says.

The bill clearly states, "The reforms to the election laws of this state made by this Act are not intended to impair the right of free suffrage guaranteed to the people of Texas by the United States and Texas Constitutions, but are enacted solely to prevent fraud in the electoral process."

Here's some of what the "awful" bill would do, now that the United States has moved away from the longstanding tradition of casting ballots in person, on Election Day:

-- Death certificates would be filed monthly with the voter registrar and secretary of state so fraudsters can't vote in a dead person's name.

-- A voter may deliver a marked ballot in person to the early voting clerk's office only while the polls are open on Election Day. A voter who delivers a marked ballot in person must present an acceptable form of identification. (In-person voting in Texas already requires ID, such as a Texas driver's license, a government-issued identification card, a Texas handgun license, an election identification certificate, a U.S. military ID card, a U.S. citizenship certificate, or a U.S. passport.)

-- A person, other than an election officer, who assists a voter at the polls -- or who helps with mail-in ballots -- must prove who they say they are, why they are helping, and their relationship to the voter. In-person assistants must take an oath, swearing that "I will not suggest, by word, sign, or gesture, how the voter should vote..." People who assist with mail-in ballots must say whether they received or accepted any form of compensation from a candidate, campaign, or political committee in exchange for providing assistance, which would be illegal.

-- The bill makes it an offense to alter ballots cast by someone else; cast a ballot under false pretenses; fail to count valid votes; count invalid votes; and mislead an election official.

-- The bill bars compensation or any other benefit for vote harvesting and it bars solicitation and distribution of applications to vote by mail. Eligible voters wishing to vote by mail must request their own ballot applications.

Texas Democrats staged a walkout last month to block passage of the Texas voting bill. Gov. Greg Abbott called it "deeply disappointing and concerning for Texans" that the bill never reached his desk, but he said it will be among the priorities for an upcoming special session of the legislature.

Meanwhile, the bill being pushed by congressional Democrats would relax the safeguards, including the vote-by-mail and voter ID requirements, contained in the Texas bill.

Schumer, asked on Tuesday why he'll bring the Democrats' voting "rights" bill to a vote next week when he doesn't have the votes -- so far -- to pass it, said: "Look, it's so important. And we're working as we speak with others, including Senator Manchin, to see if we can get a big, strong bill passed. We have to get it done. It's very important. It will be voted on."