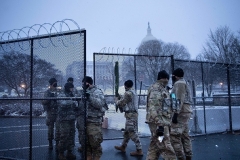 Members of the National Guard are seen at a Capitol security checkpoint on February 1, 2021. (Photo by BRENDAN SMIALOWSKI/AFP via Getty Images)

(CNSNews.com) - "Security, security, security," House Speaker Nancy Pelosi (D-Calif.) wrote to her Democrat colleagues on Monday, as she announced that an outside, 9/11-style commission will be established to investigate the Jan. 6 attack on the U.S. Capitol.

Press reports say Pelosi also plans to keep thousands of National Guard troops at the Capitol beyond mid-March -- possibly into the fall.

Republicans want to know why:

I'm still a serving national guardsman, and I can appreciate that those soldiers were pulled out of their businesses, their jobs, their families, and they're sitting there with this open-ended mandate.

I've repeatedly asked, as have a number of my colleagues, the Army, the National Guard Bureau, the Department of Justice, what is the threat that is so large, specifically, that requires more soldiers on Capitol Hill than we have in Iraq and Afghanistan combined? And then what are we going to do about it? What are we going to do going forward?

This is just this kind of open-ended mandate. I'm calling it Fort Pelosi at this point. The Guard can't serve as her private security force, and we need answers and we're not getting any.

"Myself and several of my colleagues have asked Nancy Pelosi for a briefing as to why do we need these troops here? And we have received zero information, zero," McClain told "Fox & Friends" on Monday.

"I feel like there's a boogie man under my bed," McClain said. "So, at the end of the day, is just explain to us why we have the National Guard troops.

“Think about it this way. We have more servicemen and women protecting the Capitol than we do in Iraq and Afghanistan combined. To the tune of already $500 million. And that number for the taxpayers is only going to grow if we keep them there.”

McClain said her own State of Michigan is talking about sending a thousand more Guard troops to Washington "for reasons that we don't know."

"I would rather put those National Guard men and women to help my constituents in my state -- help with the distribution of the COVID relief vaccination. That, I know, is a credible threat. This threat over here I have no idea, because we can't even get a briefing on it."

McClain said right now, she only knows what the media has reported. The D.C. Fox affiliate WTTG obtained an email showing National Guard troops may be kept in the region until the fall.

In her "Dear Colleague" letter, Speaker Pelosi did not address the timeline for keeping National Guard troops in Washington.

Pelosi noted that she has already asked Lt.-General Russel Honoré to make security recommendations following the January 6 attack, but she said more is needed to "get to the truth of how this happened."

As we prepare for the Commission, it is also clear from General Honoré’s interim reporting that we must put forth a supplemental appropriation to provide for the safety of Members and the security of the Capitol.

Also See:
Pelosi: 'The Enemy is Within the House of Representatives’