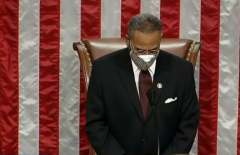 (CNSNews.com) - Rep. Emanuel Cleaver (D-Mo.), an ordained United Methodist pastor, on Tuesday explained why he ended his prayer for the 117th Congress with "Amen" and the bizarre, made-up word, "a-woman."

"In our society now, we look for opportunities to be outraged," Cleaver told Fox News's Neil Cavuto.

I ended the prayer by saying 'amen,' which -- and it is -- it's a Hebrew -- it comes from a Hebrew root word. And there are a lot of definitions of it. But, mainly, it's interpreted to 'be true,' or 'may it be,' things like that.

The a-woman was after the prayer ended, trying to recognize the record number of women now in Congress and a female chaplain. So, I said a-woman, and felt good.

It was not until, the way our society works now, the Twitter world sent out to the people who express outrage. And then they usually get it.

Cavuto noted that many people took offense, believing that Cleaver was trying to make an unnecessary "gender politically correct statement" or to "gender-proof God."

"Ninety-nine-point-99 percent of the people who are expressing outrage didn't even hear the prayer," Cleaver responded. "The prayer wasn't -- wasn't for them. I'm talking to God on behalf of Congress asking for unity and so forth, asking God to give us that strength to do that.

Then I ended the prayer by saying 'amen.'

Cleaver said it's a "problem" that "nations trip and fall over molehills, not mountains. And, as we are arguing and fighting over democracy right now, we're at a point where we're ready to say, well, here's something we can fight about, that somebody did a prayer and said a-woman. And so let's go fight about it.

Cleaver noted that he didn't say "a Democratic woman or a Republican woman.

"We have women, both Republican and Democrat, in record numbers. And then I said 'a-woman.'"

Under new rules adopted by the U.S. House of Representatives for the 117th Congress, lawmakers must "honor all gender identities by changing pronouns and familial relationships in the House rules to be gender neutral."

The new "gender-inclusive" language includes "seafarers" for seamen and "chair" for "chairman."

"He" and "she" are discouraged in referring to lawmakers. The preferred terms are now "Member, Delegate, or Resident Commissioner."

"Themselves should be used instead of "himself' or "herself."