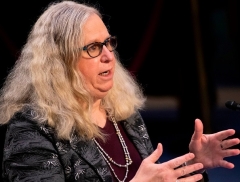 Rachel Levine, nominee for Assistant Secretary of Health and Human Services, testifies before the Senate Health, Education, Labor, and Pensions committee on February 25, 2021. (Photo by CAROLINE BREHMAN/POOL/AFP via Getty Images)

(CNSNews.com) - It is now offensive and inappropriate in the U.S. Congress for a lawmaker to question a transgender physician about her views on minor children making the decision to change their sex through hormone use and surgery.

At her confirmation hearing on Thursday, Dr. Rachel Levine, born Richard, twice refused to say whether she thinks minors are capable of making such a "life-changing decision," as Sen. Rand Paul (R-Ky.) put it. (See below)

Later in the hearing, Sen. Patty Murray (D-Wash.) chair of the Senate Committee on Health, Education, Labor & Pensions, criticized Paul for his line of questioning:

"It is really critical to me that our nominees be treated with respect and that our questions focus on their qualifications and the work ahead of us rather than ideological and harmful misrepresentations, like those we heard from Senator Paul earlier," Murray said.

"And I will focus on that as chair of this committee. So thank you again for your response," she told Dr. Levine. "And with that, I will turn it over to Senator Murphy."

Sen. Chris Murphy (D-Conn.) thanked Murray, then said: "Let me associate myself with your remarks. Thank you for your -- for the way in which you handled those questions. I'm really looking forward to working with you, Dr. Levine."

Dr. Levine, I also want to say how much I appreciate the dignity and the professionalism that you demonstrated in your response to Senator Paul, as a physician and as a public servant. And I want to be really clear that this is a moment where we should be focusing on the grave challenges before us.

And one of these challenges is that LGBTQ+ people have long faced discrimination and barriers to healthcare. They are much more likely than non-LGBTQ plus people to lack access to insurance and to affordable medical care.

We need advocates at all levels to make sure that we address that inequity and that we fight against discrimination and ensure that everybody, all patients, have access to care, especially amid this crisis which has revealed so many inequities. So I wanted to thank you.

"For most of our history, we have believed that minors don't have full rights and that parents need to be involved, so I am alarmed that you won't say with certainty that minors should not have the ability to make the decision to take hormones that will affect them for the rest of their life. Will you make a more firm decision on whether or not minors should be involved in these decisions?" Paul asked.

Levine responded, "Senator, transgender medicine is a very complex and nuanced field, and if confirmed to the position of assistant secretary of health, I would certainly be pleased to come to your office and to talk with you and your staff about the standards of care and the complexity of this field."

According to a press report dated January 2017, Levine -- then serving as Pennsylvania’s physician general -- discussed hormonal treatment for teenagers.

The reporter summarized Levine's comments this way (note these are not direct quotations):

If the situation is right and parents consent, hormonal treatment can start in the mid-teens, Levine said.

But without parental consent, hormonal therapy cannot start until age 18, unless the child is fully emancipated — a legal process that grants a teenager who is 16 or older legal independence from his or her parents or guardians.

Surgical treatment is not generally recommended before age 18, she (Levine) said.

However, in a January 24, 2020 tweet, Dr. Levine wrote: "A new study has found that #Transgender youth with access to a puberty blocker have decline in chances of suicide + #mentalhealth problems now and in the future. This study is important because it's the first to show this specific association."

Levine's tweet linked to a CNN report, which quoted Levine as saying:

"It is very important for medical professionals to understand scientific studies like this," Levine said.

She pointed out several clinics in Pennsylvania that can provide this kind of care, although most are located in large urban areas. Access would be much more difficult for children in rural Pennsylvania and in other areas of the country and she said she hopes that changes.

The study, she said, points to why access is so important, counter to some political movements to deny children such access.

"It is also critically important as far as policy," Levine said, "that policy makers do not get in the way of medical standards of care."