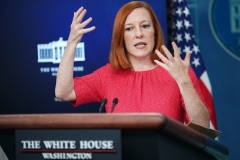 (CNSNews.com) - White House Press Secretary Jen Psaki is not an economist, but her spin on the anticipated March 2022 inflation report, due out this morning, was interesting.

At Monday's press conference, Psaki differentiated between "core" inflation and what she called "headline" inflation.

"How high do you expect these numbers to be?" a reporter asked Psaki the day before the Bureau of Labor Statistics releases the Consumer Price Index for March:

"So because of the actions we've taken to address Putin -- the Putin price hike, we are in a better place than we were last month," Psaki responded.

"According -- inflation doesn't include energy and food prices. Headline inflation does," Psaki said. "And of course, we know that core inflation, you know, energy, the impact of energy, of course, on oil prices, gas prices, we expect that to continue to reflect what we've seen the increases be over the course of this invasion."

Regardless of what you call it, both "core" inflation and "headline" inflation, as Psaki put it, were already running at 40-year highs in February.

And she's right -- by some measures, inflation is even worse in March.

On Monday, the Bureau of Labor Statistics reported that the Consumer Price Index for All Urban Consumers (representing about 93 percent of the total U.S. population) increased 1.2 percent in March on a seasonally adjusted basis after rising 0.8 percent in February and  0.6 percent in January. Increases in the indexes for gasoline, shelter, and food were the largest contributors to the seasonally adjusted all items increase, which Psaki has dubbed "headline inflation."

But the rising cost of food, shelter and fuel are what consumers may be most aware of.

Over the last 12 months, the all items index increased 8.5 percent before seasonal adjustment, the largest 12-month increase since the period ending December 1981.

The all items less food and energy index rose 6.5 percent, the largest 12-month change since the period ending August 1982.

Psaki told reporters on Monday that average gasoline prices are up more than 80 cents a gallon since "Putin's military buildup accelerated in January." (Republicans note that gasoline prices were rising even before that, and they blame President Biden's for his shift away from fossil fuels.)

"Most of the (gas price) increase occurred in the month of March," Psaki said, "and at times, gas prices were more than a dollar above pre-invasion level. So that roughly 25 percent increase in gas prices will drive tomorrow's inflation reading. And certainly -- it's not a surprise to us, but we certainly think it will be reflected,” she continued:

"And in March, again, to give you a point of comparison, the average cost of a barrel of oil was around $110. That's compared to about $75 at the beginning of the year. So we expect this to all be reflected as we look at the data tomorrow.

"I will say that any time there is heightened monthly data or inflation reporting or numbers, it is a reminder to us, to our allies on the Hill, and hopefully to many of the American people, that we need to do more to reduce costs for the American people.

"We have, of course, legislation that could do exactly that; cut the cost of child care, of health care, of elder care. These all have enormous impacts on people's budgets, on when they're doing those calculations at their kitchen table. And -- and certainly this data will be a reminder of the need to do something and take additional steps."

Later, in response to another reporter, Psaki said she was anticipating "an increase in the overarching headline number" because of higher oil prices.

"The core inflation, as you know, because you cover this very closely, does impact a range of factors that we're still working to address. So -- but I was making a prediction about the headline component."