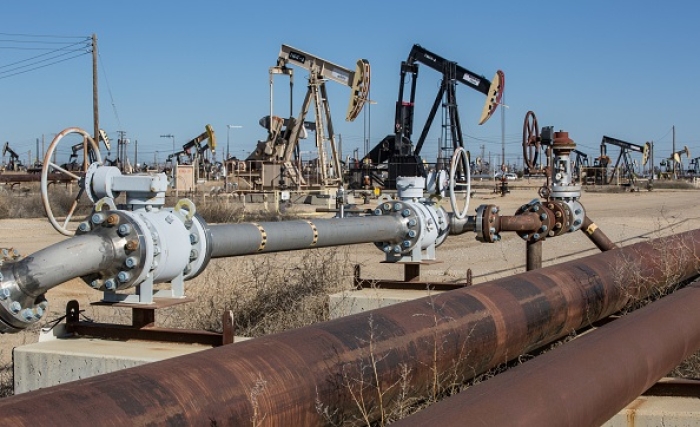 Oil pipelines, pumping rigs, and electrical transmission lines dot the landscape along California's "Petroleum Highway" (Highway 33) running along the northwestern side of the San Joaquin Valley on April 24, 2020, near McKittrick, California. (Photo by George Rose/Getty Images)

(CNSNews.com) - Under court order, the U.S. Interior Department is resuming the sale of onshore oil and gas leases on 144,000 acres of public land, an 80 percent reduction from the 733,000 acres originally nominated by energy companies.

The Interior Department said the new leases will include a "first-ever increase in the royalty rate" that oil companies must pay.

But even as oil and gas prices rise significantly, the Biden White House opposes the resumption of lease sales.

"These leases are not in line with our policy or the president's view," White House spokeswoman Jen Psaki told reporters on Monday.

She noted that the lease sales will happen only because of "court action."

"Well, let me first say that today's action, as you know...was a result of a court injunction that we continue to appeal. And it's not in line with the president's policy, which is to ban additional leasing. Because one, we need to move towards a more clean energy economy, which he strongly believes in. But also, because there are 9,000 permits unused on lands that could be tapped into by oil companies, and we don't feel they are needed.

"In terms of how long it will take to get up drilling, because of the court action, I don't have any assessment on that from here. I would just note that we are going to continue to fight this court injunction that is forcing our hand and allowing this to proceed, even as we have taken actions to reduce by 80 percent the areas to lease and impose stringent environmental standards."

A reporter noted that President Biden has promised to reduce U.S. greenhouse gas emission in half by the year 2030. "Now you're having to expand the production of fossil fuels when you promised to curtail them. Congress, as we know, has yet to act on many of your climate proposals. Is the president's ambitious climate change goal and agenda still attainable?" the reporter asked Psaki:

"One of the reasons that this was so troubling to him is because he is so committed to that objective as president, and we continue to propose -- have continued to propose a historic investment in addressing the climate crisis, something that we will continue to discuss with Congress," Psaki said.

Psaki said the 2030 goal is still achievable: "We are continuing to pursue it, and we are going to continue to do everything we can to reach it."

Another reporter asked Psaki if the additional domestic oil production "could help," even if Biden opposes it, given disruptions in the global energy supply caused partly by Russia's war in Ukraine and partly by Biden's own restrictive energy policy.

"I can tell you from talking with him about this this morning, he does not" (believe it could help), Psaki said. "He believes that, as he announced -- and he remains committed to the ban he called for on the expansion of -- of leasing on federal lands in part because he wants to move toward a clean-energy economy, and he's very committed to that, and address climate change, but also because there's 9,000 unused leases that can be tapped into and used.

"And we, certainly, have encouraged oil companies to do that to help address exactly as you said, the need to get more supply in the marketplace."

(The American Petroleum Institute has dismissed White House claims about "unused leases" as a "red herring" argument. You can read about it here.)

Psaki said the Interior Department secretary's "hands were tied in many ways" by legal requirements.

"But what they did, which she certainly supported, was take steps to reduce by 80 percent the areas to lease, and they also imposed stringent environmental safeguards in order to take additional steps even as the court injunction made them take these steps."

"How we manage our public lands and waters says everything about what we value as a nation," said the April 15 announcement by Interior Secretary Deb Haaland.

"For too long, the federal oil and gas leasing programs have prioritized the wants of extractive industries above local communities, the natural environment, the impact on our air and water, the needs of Tribal Nations, and, moreover, other uses of our shared public lands.

"Today, we begin to reset how and what we consider to be the highest and best use of Americans’ resources for the benefit of all current and future generations.”