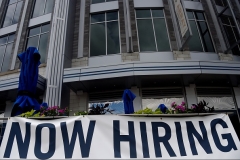 A restaurant displays a "Now Hiring" sign amid the coronavirus pandemicin Arlington, Virginia. (Photo by OLIVIER DOULIERY/AFP via Getty Images)

(CNSNews.com) - October marked the sixth straight month of post-pandemic employment gains, as the economy added 638,000 jobs and the nation's unemployment rate dropped to 6.9 percent, a point below September's 7.9 percent and far lower than the record-shattering, COVID-induced 14.7 percent in April.

In October, the civilian non-institutional population in the United States was 260,925,000. That included all people 16 and older who did not live in an institution, such as a prison, nursing home or long-term care facility.

Of that civilian non-institutional population, 160,867,000 were participating in the labor force, meaning they either had a job or were actively seeking one during the last month. This resulted in a labor force participation rate of 61.7 percent in October, a slight improvement from the 61.4 percent in September, but well below the Trump-era high of 63.4 percent set this past January and February.

The labor force is made up of the employed and the unemployed. The remainder -- those who have no job and are not looking for one -- are counted as “not in the labor force," and this number remains stubbornly high -- 100,058,000 in October, a slight improvement from September. This number has ranged from 103 million to 99 million since the economic shutdown. Before that, it hovered in the 94 million to 95 million range.

BLS notes that this "not in the labor force" number has been steadily increasing in recent years as more baby boomers retire, and certainly the COVID-related business closures have accelerated the increase as more people drop out of the workforce.

Contrast the October jobs report with that of February, when the United States recorded its first death from coronavirus.

Notable job gains occurred over the month in leisure and hospitality, professional and business services, retail trade, and construction. Employment in government declined.