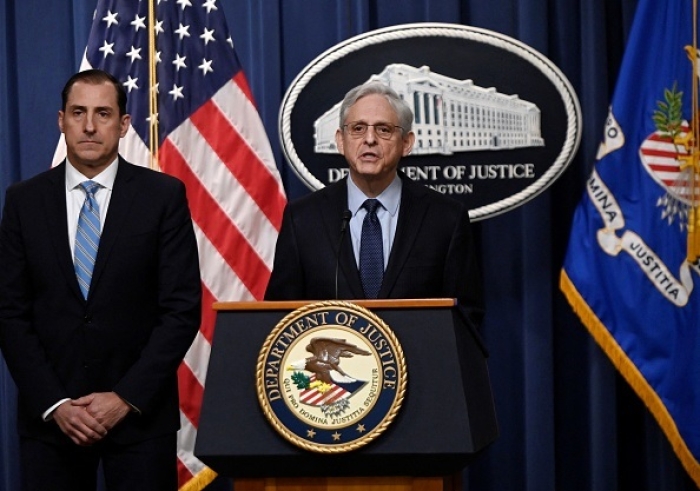 Attorney General Merrick Garland names an independent special counsel to probe President Joe Biden's alleged mishandling of classified documents on January 12, 2023. On left is US Attorney John Lausch, who made the recommendation to Garland. (Photo by OLIVIER DOULIERY/AFP via Getty Images)

(CNSNews.com) - Rep. James Comer (R-Ky.), chairman of the House Oversight Committee, says he's "not a big fan" of special counsels, because "there's never been one that really ever accomplished what they set out to do. And they always expand their investigations."

But Comer added that Attorney General Merrick Garland "had no other choice" but to appoint a special counsel to investigate Joe Biden's alleged mishandling of classified documents because Garland did that in Donald Trump's case.

"They made a big deal out of Trump's handling of classified documents," Comer told Fox News's Neil Cavuto:

"But let me be clear. This special counsel better be just focused on Biden's classification, his handling of classified documents, not on our investigation. We're investigating the Biden family influence peddling. I think you see, with what we have learned about the Biden Center for Diplomacy, their major donor were anonymous donors from China.

"If you look at where Hunter Biden's money was coming from for his so-called investments, they were from anonymous donors in China, his artwork that he is selling in New York City supposedly going to China to anonymous buyers. I mean, there's a pattern here with the Bidens and China that's very concerning for national security.

"So, I'm concerned about Biden's mishandling of classified documents, given the fact that China has so much access to this family. But I'm also concerned about an overall broader picture of potential corruption with Joe Biden and China."

Documents, some classified, dating to Biden's term as vice president have been found in three locations, his attorneys say -- in Biden's office at the Penn-Biden Center in Washington; in the locked garage of Biden's Wilmington home (along with his Corvette, Biden said); and one document was found in the library of that same house.

"I think that I would believe him if he said he didn't know he had those documents in possession," Comer said.

"This is very concerning. I'm not buying all the aspects of the explanation of how the documents were discovered. But, at the very least, we want to know who had access to both the Biden personal residence and the Biden Center.

"Considering that communist China was the biggest donor to the Biden Center for Diplomacy, I think we should be very concerned about who all had access to that building."

Comer asked: "Who would pay high-dollar lawyers to physically move boxes and documents in a move from one office space to the other? I'm not buying that.

"And then I'm concerned that this was discovered on November 2. Why are we just now finding out about it? The only reason we know about this was CBS had an investigative reporter that broke this story two days ago."

Comer noted that previous presidents have mistakenly taken classified documents with them after leaving office:

"We need to reform this whole process. The president doesn't pack their own boxes when they leave office.

"We need to have a strict process for how documents are packed and which documents can be identified as classified or not, because a president's always going to take an enormous amount of documentation with them when they leave office, because they rightfully want to write a book.

"They want to have memoirs and things like that. But, at the end of the day, this shows the incompetence of the National Archives. We have requested information. They're normally a sleepy government bureaucracy that comes before my committee once a year for a general report. They won't even return our calls right now.

"It's very concerning. This is another government agency that is in dire need of reform. And it's on our priority list in the Republican majority."