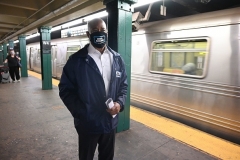 During his campaign (shown here) and later as New York City Mayor-elect, Eric Adams is not above taking the subway to get where he's going. (Photo by TIMOTHY A. CLARY/AFP via Getty Images)

(CNSNews.com) - "COVID is a formidable opponent, and it continues to evolve. We must pivot and evolve with it," New York City's new Mayor Eric Adams told ABC's "This Week" with George Stephanopoulos on Sunday.

Adams has vowed to keep the public schools open, to keep city services running, and to get people back to work.

"We have to see ourselves past the crisis. If we close down our city, it is as dangerous as COVID. That's what our focus must be. So, the proper balance of safety, keeping our economy operating is going to allow us to get through this."

Adams said flexibility is the way to deal with COVID and the latest omicron variant. He noted that various subway lines are closed but not the entire subway system:

"I took the train in on Saturday," he said. "So we are pivoting based on where the urgency is located. This is smart, the way we're doing it. We're not taking it one-size-fits-all. We're thinking about it and making the right moves and decisions.

"I was with my police commissioner. We have a 20 percent -- about a 20 percent sick rate. But now, we have officers coming back after the five days.

"So, we're doing an amazing job of shifting the way the virus is causing us to do so."

COVID cases are rising in New York City, with a seven-day average of 28,386, according to the health department. The highly transmissible omicron variant is blamed for the spike.

"But we can't live through variants," Adams said.

"We spent $11 trillion on COVID and we don't have another $11 trillion. So our lives can't be based on what's the new variant. No. We have to figure out, how do we adjust?

Adams said parents should not be afraid to send their children back to school.

The stats are clear. The safest place for children is inside a school. The numbers of transmissions are low, your children (are) in a safe space to learn and continue to thrive. We've lost almost two years of education. George, we can't do it again.

We just have to be smarter and thoughtful to keep our cities safe and operating.

"We're going to examine the numbers. If we feel we have to get to the place of making that mandatory, we're willing to do that, but we're encouraging them to do that now."

Adams noted that booster shots may not prevent breakthrough cases of COVID, but "it's going to prevent you from dying. It's going to alleviate the possibility of you being hospitalized and going on a ventilator. The goal is to build up your immune system, and the booster shot is going to do that.

"The numbers are clear. Look at those who are not vaccinated. They are sky high. Numbers who are, they are at a moderate level. That's what we must focus on."