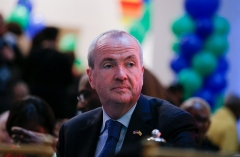 Asked how he will prevent fraud in November, Murphy said, "You never can say you bat one thousand, but I'm pretty sure that we have a higher probability of being hit by lightning than we do uncovering voter fraud."

Murphy noted that because of the COVID pandemic, his state delayed its primary election until July 7, and it pursued a hybrid model" at that time, meaning:

We mailed ballots to folks who were registered in either party, we mailed applications to those who weren't, and we also provided in-person voting capacity -- at least 50 percent in each county and at least one location in each municipality. It was a success. Not perfect, but overwhelmingly a success.

And so we're going to announce -- not to break too much news here -- later today, that we're going to extend that model into the general election in November. We're going to -- most importantly, we have learned some lessons, including we're going to have more presence of secure drop boxes. Make sure there is that physical in-voting capacity.

And as it relates to mail-in ballots, the good news is, in a general election, it doesn't matter what party you're in, everybody gets a ballot. So we'll have a hybrid model in November. We liked what we saw, we'll tweak it, and that's where we're headed.

Murphy said people who do vote in person will cast a provisional ballot, "because the folks won't necessarily know at the voting location whether or not you actually already mailed a ballot in. That's what we did in the primary. A little bit more cumbersome, but it works," Murphy said.

Host John Berman actually admitted that although voter fraud is "very rare" in this country, "fraud with mail-in ballots is a little bit higher than in-person voting, but still extraordinarily small." Berman mentioned the recent "problem" in Paterson, New Jersey, where "part of it had to do with ballots," and "there was a tiny bit of fraud as well."

Gov. Murphy agreed: "Yeah, was some very specific issues around the Patterson mail-in ballots in our May local elections, and law enforcement is actually pursuing that.

“Overwhelmingly this was successful. You never can say you bat 1,000, but I'm pretty sure that we have a higher probability of being hit by lightning than we do uncovering voter fraud."

President Trump, in his recent arguments against the mass mailing of actual ballots to all registered voters, has pointed to the Paterson situation as a reason not to do it.

The New Jersey attorney general has filed voter fraud charges against two of the winners in Paterson's ward council elections, along with two campaign workers involved in a third race.

According to The Paterson Press, "Councilman Michael Jackson, 48, and Councilman-elect Alex Mendez, 45, were accused of violating state law governing the way mail-in ballots are supposed to be collected and filled out, said Attorney General Gurbir Grewal."

NPR reported that the investigation began after the U.S. Postal Inspection Service tipped off state law enforcement officials to hundreds of mail-in ballots stuffed in a Paterson mailbox. Other bundled ballots were discovered in another nearby city.

Trump: No Deal with Democrats 'Means You Can't Have Universal Mail-In Voting'

Trump: 'I'll Tell You Who Is Meddling in Our Elections. The Democrats...'