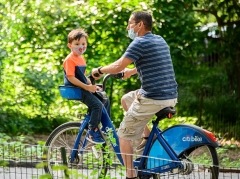 CDC now recommends that children wear face masks in public, and maybe even at home. (Photo by Noam Galai/Getty Images)

(CNSNews.com) - Dr. Francis Collins, director of the National Institutes of Health, said on Tuesday the delta variant is not only more contagious -- "it's clear this variant is capable of causing serious illness in children."

Collins also said parents of unvaccinated children "should be thoughtful about this," in considering whether to wear face masks, even at home.

"So Kate from New York has this question," Berman told Collins. "Has the delta variant increased the risk for young children? My daughter is 2 years old, doesn't wear a mask, should we avoid taking her indoors in public?"

It's clear that this variant is capable of causing serious illness in children. You have heard those stories coming out of Louisiana pediatric ICUs where there are kids as young as a few months old who are sick from this. That is rare. Certainly young people are less likely to fall ill. But anybody who tries to tell you, ah, you don't have worry about it if you're a young, healthy person -- there's many counter examples all around us now.

So, yeah, you do need to think about it, and that's the reason why the recommendations are for kids under 12 that they avoid being in places where they might get infected, which means recommendations of mask-wearing in schools and at home.

Parents of unvaccinated kids should be thoughtful about this, and the recommendation is to wear masks there as well. I know that's uncomfortable. I know it seems weird, but it is the best way to protect your kids.

Berman followed up, asking again, "Is delta making kids more sick? Are they getting sicker than they were? Is there any evidence of that from the previous variants?"

"There is suggestive evidence comparing delta, and this is from studies in Singapore, in Scotland, in Canada, that, in fact, this is not just more contagious, but more serious in various age groups," Collins said. "It's not as solid as I wish it was. We don't have really enough numbers to be confident, but it certainly tilts the balance in that direction."

Berman told Collins, "I think you need to emphasize that, then, if you're seeing evidence of this, because that's a change, right? Before, the big concern was that the kids, you know, could get it, pass it to others, but by and large, they weren't becoming ill in great numbers -- in any kind of numbers that were causing deep concern. But now what you're saying is they can get sick enough that this is a worry."

"It's sick enough they can be a worry -- it frankly was before, and perhaps it was under-emphasized," Collins said.

"In part now because older people who are mostly vaccinated are not so much filling up the hospitals, the average age has dropped significantly. And so now we're seeing perhaps in this spectrum of illness more emphasis on younger people, including kids.

"Again, I don't want to overstate the confidence that we have about whether delta is more dangerous to children. The balance has not been fully settled there, but it's tipping in that direction."

Based on death certificates submitted to CDC's National Center for Health Statistics, as of July 28, 2021, a total of 340 children, ages 17 and under, have died from "COVID-involved" illness since the pandemic started in January 2020.

Those 340 children represent 0.663 percent of the total deaths from all causes among children 0-17 during that same period.

The chart below shows the most current data from CDC's website as of July 28, 2021.

"So we continue to see younger and younger patients," O'Neal said, with half of all admissions being unvaccinated people under the age of 50.

And the risk to children is "getting higher," O'Neal said:

"So while kids overall do okay -- and mostly from viruses, kids are fine. Our hospital is at its capacity," she said, and is not accepting new patients today.