Military Is Educating Soon-to-Be Veterans About Extremist Recruitment; 'Who's Going to Be Looking For Them' 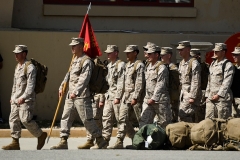 (CNSNews.com) - Starting this month, the Defense Department Inspector-General plans to investigate whether military recruiting organizations have screened applicants for supremacist, extremist, and criminal gang behavior, as DoD policies require them to do.

Pentagon spokesman John Kirby explained how the military aims to root out extremism in the ranks -- and among veterans. He spoke to MSNBC's Hallie Jackson on Thursday:

What we're trying to do, Hallie, is take a look at an individual's time in the military from the beginning to the end, and to make sure that we are doing what we can to bring in the folks that don't espouse ideologies that are inimical to defending the Constitution and the United States, and aren't going to cause violence on their own teammates, making sure that we're bringing the right people in, and then, while they're in the service, making sure that we are continually reinforcing the values of this institution, educating and informing them.

And this is really critical. As they get ready to leave, we know that a lot of extremist groups deliberately recruit veterans, because veterans have leadership skills and weapons skills and all kinds of capabilities available to them. We know that they're going after some of these veterans.

So, what we're trying to put in place now is specific training and education initiatives at the end of somebody's career, before they become a veteran, so that they can understand what's out there and who's going to be looking for them.

This follows several earlier actions intended to discover the extent of the problem.

On February 3, 2021, Secretary Austin ordered a one-day stand down at all levels of the military "to hold an in-depth conversation on the values underpinning national service, the oath of office, and the importance of unit cohesion, as well as to gain a better understanding of the scope of the problem of extremist activity within the ranks."

The stand down followed information that some of the Trump supporters who attacked the U.S. Capitol on January 6, 2021 were current or former military.

Kirby told a January 28, 2021 news conference that although the number of extremists in the military may be "small" it is not "insignificant."

"The problem is, we don't understand the full scope of it," Kirby said at the time.

It was that group, CEAWG, that released a report last month on how the military will handle "protest, extremist, and criminal gang activities among members of the Armed Forces."

In that report, CEAWG defined "extremist activities" as advocating or engaging in:

-- Unlawful force, unlawful violence or other illegal means to deprive individuals of their constitutional or lawful rights.

-- Unlawful force or violence to achieve goals that are political, religious, discriminatory, or ideological in nature.

-- Supporting terrorism in the United States or abroad.

-- Encouraging military, civilian or contractor personnel within the DoD or Coast Guard to disobey lawful orders or violate U.S. laws;

"The term 'active participation' means the following, except where such activity is within the scope of an official duty (e.g., intelligence or law enforcement operations)":

-- Advocating or engaging in the use or threat of unlawful force or violence in support of extremist activities.

-- Advocating for, or providing material support or resources to, individuals or organizations that promote or threaten the unlawful use of force or violence in support of extremist activities, with the intent to support such promotion or threats.

-- Knowingly communicating information that compromises the operational security of any military organization or mission, in support of extremist activities.

-- Recruiting or training others to engage in extremist activities.

-- Fundraising for, or making personal contributions through donations of any kind (including but not limited to the solicitation, collection, or payment of fees or dues) to a group or organization that engages in extremist activities, with the intent to support those activities.