McConnell: Flynn Entrapped? It Would Be 'A Major, Major Error' by FBI's 'Top Leadership' 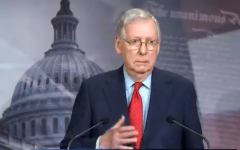 (CNSNews.com) - Senate Majority Leader Mitch McConnell on Thursday congratulated Fox News for its "outstanding work" in developing the story of an FBI apparently intent on trying to catch Gen. Michael Flynn, then the national security advisor-designee, in a lie.

"It's been interesting to watch, and if all of this proves to be true, you will have certainly a major, major error on the part of top leadership at the FBI, which could well warrant additional charges against them,” McConnell said.

"I mean, if true, this is very, very troubling -- disturbing."

Handwritten notes by former FBI Counterintelligence Director Bill Priestap, released late Wednesday night, ask: "What's our goal? Truth/Admission or to get him to lie, so we can prosecute him or get him fired? If we get him to admit to breaking the Logan Act, give facts to DOJ & have them decide. Or, if he initially lies, then we present him [redacted] & he admits it, document for DOJ, & let them decide how to address it."

What happened next indicates the FBI decided to play games. Former FBI Director James Comey later admitted that he decided to take advantage of chaos in the four-day-old Trump administration by sending two FBI agents to the White House to question Flynn, without going through the White House Counsel's office.

Flynn did not have an attorney present, and by Comey's own admission, Flynn did not know the real reason the FBI agents were there because the FBI didn't tell him.

McConnell said decisions about bringing criminal charges against Comey should "be made by others."

"I think, if those decisions are made -- either if the Attorney General decides there are charges to be brought, or the president decides there is a pardon to be issued -- that would be the appropriate time to respond. I'm not going to give them advice about this. They're going to look at the facts presumably and decide what's appropriate for the country."

(The newly released information on the FBI's internal discussions about Flynn can be seen here.)