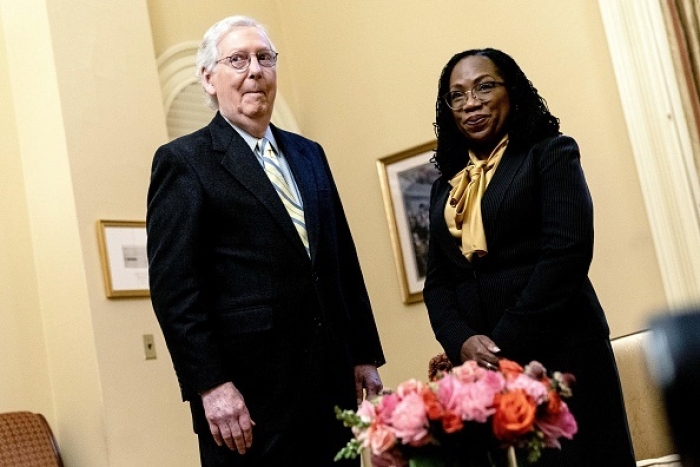 (CNSNews.com) - Senate Minority Leader Mitch McConnell (R-Ky.) said he "had a very good conversation" with President Biden’s Supreme Court Nominee Ketanji Brown Jackson in his office. He expects her to be confirmed.

But on Sunday, McConnell told CBS's "Face the Nation" he was surprised by one of the questions she refused to answer during their meeting:

“And I asked her, you know, typically the supreme court nominees of both parties have never answered any of the questions. What they typically say is that something that might come before me and I don't want to pre-judge how I might actually vote.

"But I asked her to defend the court. Ruth Bader Ginsburg and Justice Breyer both publicly opposed court-packing, that is, trying to increase the number of court members in order to get an outcome you like.

“That would have been an easy thing for her to do, to defend the integrity of the court. She wouldn’t do that. So in the meantime, the committee will ask her all of the tough questions.

"I haven't made a final decision as to how I'm going to vote."

McConnell did not vote to confirm Jackson to her current seat on the U.S. Court of Appeals for the District of Columbia.

Host Margaret Brennan followed up, asking McConnell if he's "open to be persuaded" to vote for such a "historic nominee."

"And by the way, she'll be treated much better than Democrats have typically treated Republican nominees, like Clarence Thomas and Brett Kavanaugh. It will be a respectful, deep dive into her record, which I think is entirely appropriate for a lifetime appointment."

"I'm willing to listen to the testimony. That's why we have hearings," McConnell said with a laugh.

Confirmation hearings for Jackson begin at 11 o'clock this morning.