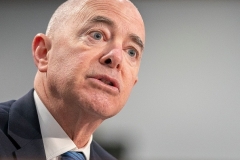 (CNSNews.com) - In his opening statement before the House Homeland Security Committee on Wednesday, Homeland Security Secretary Alejandro Mayorkas told lawmakers that contrary to what they've seen with their own eyes, DHS has been "executing a comprehensive strategy to secure our borders and rebuild our immigration system."

Later, in response to a question, Mayorkas asserted: "We have effectively managed an unprecedented number of non-citizens seeking to enter the United States, and interdicted more drugs and disrupted more smuggling operations than ever before."

But as the numbers reflect, under President Joe Biden, there are more noncitizens, drugs and smugglers coming across the southwest border than ever before. That border is not at all secure, and Mayorkas admitted that the record pace of illegal immigration is about to get worse:

"With the Title 42 public health order set to be lifted, we expect migration levels to increase as smugglers seek to take advantage of and profit from vulnerable migrants," he said.

"We will continue to enforce our immigration laws. After Title 42 is lifted, non-citizens will be processed pursuant to Title 8, which provides that individuals who cross the border without legal authorization are processed for removal. And if unable to establish a legal basis to remain in the United States, promptly removed from the country."

Mayorkas said his department started planning for the lifting of Title 42 last September, and he outlined "six pillars" to "manage the rise in non-citizen encounters."

-- "One, surge resources including personnel, transportation, medical support and facilities;

-- "Two, increase efficiency without compromising the integrity of our screening processes to reduce strain on the border.

-- "Four, bolster the capacity of NGOs and coordinate with state, local, and community partners.

-- "And six, deter irregular migration south of our border in partnership with other federal agencies and nations.

Mayorkas said the Biden administration "inherited a broken and dismantled" immigration system that was "already under strain."

But, as the numbers show, President Trump's efforts to reduce the cross-border flow, including the Remain in Mexico policy, did significantly reduce illegal immigration in the year before Joe Biden was elected president.

Joe Biden, however, promised to dismantle Trump's strict policies during his presidential campaign. In fact, Biden promised that "on day one" he would send Congress an immigration "reform" bill, and he said he would "keep families together," as well as provide a "clear road map to citizenship" for all the illegal immigrants currently in the United States.

Biden's words went out to the rest of the world -- get into the U.S. while you can, claim asylum, and someday you, too, may become a U.S. citizen. Since his election, Biden and his administration have done nothing to discourage illegal immigration except to say, "don't come."

Biden has never even been to the overrun border, where record numbers of people (and drugs) are flowing in. 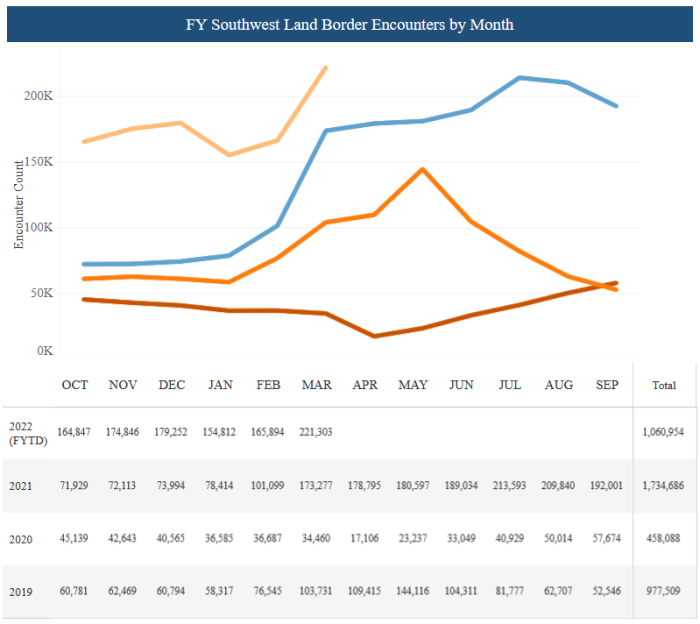 'We have effectively managed an unprecedented number of non-citizens'

Mayorkas on Wednesday said the current system "is not built to manage the current levels and types of migratory flows. Only Congress can fix this," he said. "Yet, we have effectively managed an unprecedented number of non-citizens seeking to enter the United States, and interdicted more drugs and disrupted more smuggling operations than ever before."

Mayorkas said the anticipated "significant increase" in illegal immigration once Title 42 is listed "will strain our system even further," but he said DHS "will address this challenge successfully, but it will take time. And we need the partnership of Congress, state and local officials, NGOs and communities to do so."

Mayorkas said he has requested funding to hire 300 new Border Patrol agents "to ensure the safe and humane treatment of migrants" and to do asylum processing.

"We are requesting additional funds to counter human and drug smuggling operations, combat the heinous crimes of child exploitation and human trafficking, and stop goods produced by forced labor from entering our markets," he added.

Wednesday's hearing was often contentious, with Mayorkas insisting that "we will not lose operational control of the border" when Title 42 is lifted, something that's supposed to happen on May 23, pending a court challenge.

Rep. Michael McCaul, a Texas Republican, told Mayorkas, "I've never seen the border more broken. It is not under operational control. It is out of control.

"And don't take my word for it. When I looked at the findings of the court, the cause is not climate change or some weird migration phenomena. It is the fact that on day one, your administration rescinded the Migrant Protection Protocols and Remain in Mexico because you didn't like the former President. And that's fine.

"But don't -- don't rescind what was working. This program was working, and the courts said that. Their findings of fact were that the Migrant Protection Protocol program was decreasing the volume of inadmissible aliens arriving in United States on land from Mexico. Further, they said the termination of MPP has contributed has to the current border surge."

McCaul told Mayorkas, "Your responsibility by law is to protect the United States, both air, land, and sea. You have failed in this mission when it comes to our land border, and my state and our Texas Guardsmen that...died saving two narco-raffickers. You are complicit."

Mayorkas did not have an opportunity to respond.

"The disintegration of our national sovereignty cannot be sustained. Anyone that has two brain cells, they could perhaps bump into each other, would know that is abject failure down there. So if you would identify our border as effectively managed right now...how would you identify failure?" Higgins asked.

Higgins noted that he and other Republicans have called on Mayorkas to resign. "Next year, if we have the majority in this committee, which we shall, if you're still in office, you face impeachment. I asked you as a man, own this thing. Out of respect for you and the office, I ask you to reflect upon that, and I'll give you my remaining 45 seconds to respond."

Mayorkas responded: "Congressman, I couldn't disagree with you more when you say that -- when you state that our nation's sovereignty is disintegrating."

And that was all Mayorkas said in response.