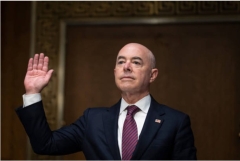 (CNSNews.com) - "We have just established a mis- and disinformation governance board in the Department of Homeland Security to more effectively combat this threat not only to election security but to our homeland security," Homeland Security Secretary Alejandro Mayaorkas told Congress on Wednesday.

On Thursday, Mayorkas said the new disinformation board "addresses disinformation that imperils the safety and security of our homeland. And one of the primary areas that we are focused on is the dissemination of disinformation and its potential connectivity...to violence."

According to the Associated Press, DHS said in a statement on Wednesday: "The spread of disinformation can affect border security, Americans’ safety during disasters, and public trust in our democratic institutions."

Rep. Jim Jordan (R-Ohio), at a House Judiciary Committee hearing on Thursday, challenged Mayorkas on the creation of a board dubbed "the Ministry of Truth" by critics:

Here is that exchange:

Mayorkas responded, "Congressman, the disinformation board addresses disinformation that imperils the safety and security of our homeland. And one of the primary areas that we are focused on is the dissemination of disinformation and its potential connectivity--

"Gentleman's time has expired," Committee Chair Jerrold Nadler (D-N.Y.) interrupted. "I am permitting the witness to answer the question, but the gentleman can say nothing now. It's witness's privilege to answer the gentleman's question. Continue your answer," Nadler told Mayorkas, who finished his sentence:

"And it's connectivity to violence. Thank you, Mr. Chairman," Mayorkas said.

On April 12, DHS's Cybersecurity and Infrastructure Security Agency released an updated set of "Disinformation Stops With You" infographics, explaining that "False or misleading information can evoke a strong emotional reaction that leads people to share it without first looking into the facts for themselves, polluting healthy conversations about the issues and increasing societal divisions." 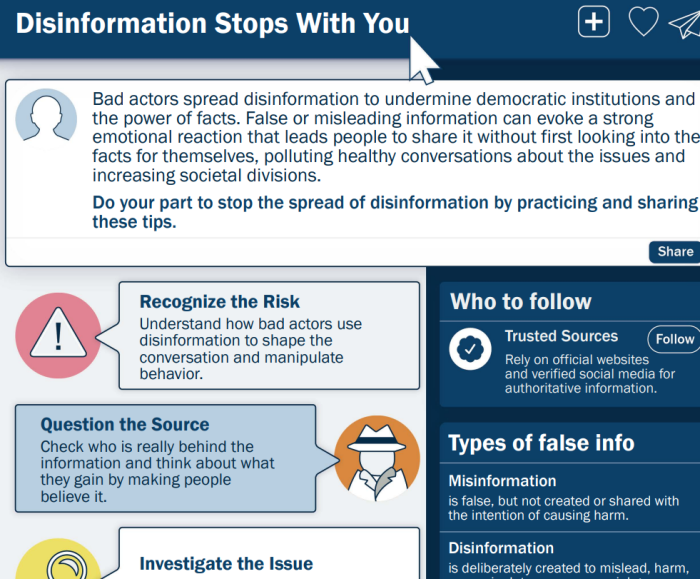 DHS released an updated "disinformation" infographic on April 12, including "five proactive steps you can take to help stop the spread of disinformation."

The infographics present "five proactive steps you can take to help stop the spread of disinformation," such as: recognize the risk, question the source, investigate the issue, think before you link, and talk with your circle.

"She is the newly appointed individual in our Office of Policy in the Department of Homeland Security," Mayorkas said.

"Is she the new executive director for Disinformation Governance Board?" Jordan asked.

"She is the executive director of the Disinformation Governance," Mayorkas confirmed.

"And this is -- is this the same individual who said the dossier was real and the Hunter Biden laptop story was false? Is that the individual who's now running the Disinformation Governance Board?" Jordan asked.

"I'm not familiar with those statements," Mayorkas said.

"It's been reported widely," Jordan told him.

"I'm not familiar with those statements," Mayorkas repeated.

Jordan tried to follow up, but once again, Nadler called "time has expired."

'I really haven't dug into this'

White House spokeswoman Jen Psaki seemed unaware of what DHS's Disinformation Governance Board will do on Thursday.

A reporter told Psaki, "Secretary said that part of its intention was to tackle misinformation in Hispanic communities especially. Can you give us an idea of what this board is going to be doing, what their authority would look like?

"I really haven't dug into this exactly," Psaki said. "I mean, we of course support this effort, but let me see if I can get more specifics. We know that there has been a range of disinfo out there about a range of topics, I mean, including COVID, for example, and also elections and eligibility. But I will -- I will check and see if there's more specifics."

The reporter also asked about Nina Jankowicz, the head of the new board: "She had previously called the Hunter Biden laptop a Trump campaign product, seeming to discredit its validity or validity of reporting surrounding that. How can -- can you assuage concerns of people who are looking at this person who's been appointed to this position and wondering if she's going to be able to accurately judge misinformation now that a lot of that reporting has been proven to be factual in some ways?" the reporter asked.

"Well, I don't have any comment on the laptop," Psaki said. "But what I can tell you is that it sounds like the objective of the board is to prevent disinformation and misinformation from traveling around the country in a range of communities. I'm not sure who opposes that effort. And I don't know who this individual is, so I have no comment on it specifically."