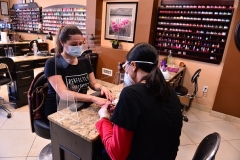 A nail technician is protected by a plexiglass barrier while giving a manicure at Nails and Spa on May 20, 2020 in Miramar, Florida. (Photo by Johnny Louis/Getty Images)

(CNSNews.com) - As of this week, every state has taken steps to reopen, some more than others, but White House economic adviser Larry Kudlow calls it "really good news."

"Automobile driving is up, gas prices are up, oil prices are up, housing demand is up. Businesses are opening left and right, and today the Congressional Budget Office just said we are going to have near 20 percent growth in the second half of the year and 4 percent growth next year. Credit that to the Trump incentives of lower taxes and regulations."

The Congressional Budget Office on Wednesday released updated economic projections for next year, to account for the 2020 coronavirus panic.

Here are some of the highlights as presented by CBO:

After falling by 1.2 percent in the first quarter of 2020, real (inflation-adjusted) GDP is projected to contract even more sharply -- by 11.2 percent -- in the second quarter. At annual rates, those declines are equivalent to 4.8 percent and 37.7 percent, respectively.

Economic growth is expected to pick up during the second half of 2020, averaging 15.8 percent at an annual rate during that time. Increases in consumer spending are expected to more than offset further declines in business investment during that period. In 2021, real GDP is projected to grow by 4.2 percent on a fourth-quarter-to-fourth-quarter basis.

Although the drop in output is acute, it has been partially blunted by past investments in information technologies (such as computers, software, and communications equipment), which have made it possible for a significant portion of economic activity to continue remotely. Before the pandemic began, almost 30 percent of workers reported that they could work from home. Since the start of the pandemic, many more workers have needed to do so, often on a full-time basis. Such activity would not have been feasible before the development and deployment of those information technologies.

Labor market conditions are projected to gradually stabilize in the coming months and begin to improve more materially after the third quarter of this year. Business activity will recover as the degree of social distancing diminishes, leading to an increase in the demand for workers. Although less than at its peak in April, some degree of social distancing is still expected to persist through the third quarter of 2021, partially constraining business activity and the demand for workers.

As the economy emerges from the shocks that occurred in March and April, job losses will probably taper in coming months. Businesses that received loans from the PPP (Payroll Protection Program) are expected to recall or rehire workers who have been furloughed or laid off, spurring an uptick in hiring and slowing job losses.

In the second quarter of 2020, nonfarm payroll employment (which measures the number of nonfarm jobs) is projected to average 129 million, which is 15 percent fewer jobs than in the fourth quarter of 2019. Compared with figures before the pandemic began, employment is projected to be down by more than 40 percent in the leisure and hospitality sector and by more than 10 percent in the retail trade, education, transportation, and construction sectors.

Household employment (which measures the number of employed people) is expected to average 133 million in the second quarter of 2020, which is almost 26 million fewer than in the fourth quarter of 2019.

Employment is expected to remain low in the third quarter of 2020. Even though CBO expects that social distancing measures will ease and that consumer demand will rebound after the second quarter, several factors are expected to weigh on employment in the third quarter, including diminishing support from PPP, which may lead to more layoffs; health risks from the coronavirus, combined with larger unemployment benefits (which, under current law, extend into the third quarter), are expected to dampen workers’ incentives to search for a job; and finally a drop in state and local government tax revenues is expected to lead to more layoffs in the state and local government sector.

In CBO’s current projections, the labor market improves more materially after the third quarter. Business activity and the demand for workers will increase as the degree of social distancing diminishes further. As a result, payroll employment is projected to recover about 30 percent of its loss by the fourth quarter of 2020.

In April, the unemployment rate surged to 14.7 percent, the highest rate in the history of the monthly data series (which goes back to January 1948). In CBO’s projections, the unemployment rate averages 15 percent in the second quarter of this year and rises to 16 percent in the third quarter as the PPP expires under current law, labor demand remains low, and labor force participation rebounds.

The labor force participation rate dropped by 3.2 percentage points since February and stood at 60.2 percent in April. That sharp fall -- unprecedented since the official monthly data began in 1948 -- highlights the fact that, in addition to its effects on the demand for labor, the pandemic has also affected the supply of labor.

Given that COVID-19 poses a much higher risk to older people than to younger people, the labor force participation rate of the former group is expected to remain depressed as long as the pandemic continues.

In CBO’s current projections, the labor force participation rate averages 60.2 percent in the second quarter of 2020 and rebounds slightly to 61.1 percent in the third quarter as social distancing measures ease. It is projected to rebound further to 61.5 percent in 2021.

(CBO’s latest estimates are based on information about the economy that was available through May 12.)