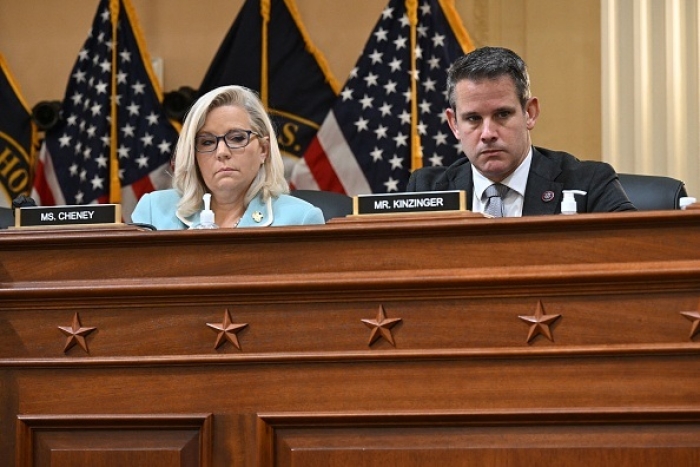 Rep. Liz Cheney (R-Wyo.), vice chairwoman of the Select Committee to Investigate the January 6th Attack on the US Capitol, and Rep. Adam Kinzinger (R-Ill.) take part in a hearing on June 13, 2022. (Photo by SAUL LOEB/AFP via Getty Images)

Kinzinger is one of two anti-Trump Republicans who joined Democrats in what amounts to a mock trial of Donald Trump, but there is no one on the select committee to cross examine witnesses or refute the carefully scripted, made-for-TV narrative pushed by Democrat politicians.

Kinzinger admitted that the select committee's one-sided investigation is intended to prompt legal action by the Biden Justice Department, although indictments aren't coming as fast as Kinzinger would like:

"I'm frustrated at the speed. I know they (DOJ) have a job to do," Kinzinger said.

Clark is a former environmental lawyer at the Justice Department who supported Trump's stolen-election theories. According to the January 6 committee, Trump wanted to make Clark the acting attorney general in the final days of his administration, because Clark was willing to get the Justice Department involved in challenging the election outcome.

The FBI raided Clark's home in Virginia on Wednesday, June 22, one day before the January 6 committee held a hearing on Clark's efforts to support Trump's claims of election fraud.

"They're not going after Jeffrey Clark, I would imagine. It’s gotta be somebody above that, and who is it?" Kinzinger told Colbert, as if he didn't know.

"But I am frustrated that, for instance, that (former Trump Chief of Staff) Mark Meadows and (former Trump adviser) Dan Scavino have refused to come in and talk to Congress. We have the power of subpoena, similar to what a court has. And the Justice Department has failed to indictment them for that.

"And so all it does is send a message you just have to resist the select committee and you may be able to resist all penalties. That's a frustration."

Colbert asked Kinzinger if the recent testimony of Meadows' aide Cassidy Hutchinson -- testimony that has been at least partially refuted -- will "provide revelations the Justice Department can see as justification for the indictment?"

"And I think, you know, look, we have these two investigations -- and again, I don't know what Justice is doing or not doing, but assuming they're investigating, we have our investigation that's very public. This all kind of feeds together.

"And even though we are not the committee that goes out and indicts people criminally, we can bring forward important information. And I think the case that we're making right now is that the president knew that he had lost the election and he attempted to overcome the will of the American people.

"And, by the way, we never want to get in a position where we're just prosecuting last administrations. That's another thing you see in failed democracies. But when you try to overthrow the will of the people, and you try a coup in the United States government, you have to pay for that, period. That's what we require."

'You're going to know the truth'

Kinzinger said the select committee is getting new information "every day." And he's already touting what he views as the historic nature of what critics deride as an anti-Trump witch-hunt:

"Yeah, I think we're going to do a couple more hearings. Obviously the investigation will continue," Kinzinger said.

"And, by the way, again, every day, new people are coming forward and saying, ‘I've got this video.’ We have a documentary maker that said, ‘I happen to have a video of the Oval Office.’ We’re like, okay, we're interested in that.

“Ladies and gentlemen, you're going to know the truth. And when your kids go to school, some day they're going to be taught the truth about January 6 because of the work this committee is doing.” (Cheers and applause).

(The interview ended at that point, with Colbert thanking Kinzinger "for your dedication to representative democracy.")