Ken Starr: Barack Obama Has Opened Himself to 'Huge Questions' 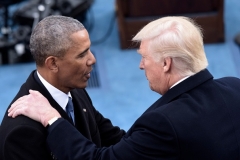 President Barack Obama shakes hands with Donald Trump at Trump's inauguration on Jan. 20, 2017. At the same time, Obama's National Security Advisor Susan Rice was writing a memo back at the White House, saying Obama -- at a Jan. 5 meeting -- had stressed his commitment to "ensuring that every aspect of this issue (apparently the FBI/Flynn issue) is handled by the Intelligence and law enforcement communities ‘by the book’. (Photo by BRENDAN SMIALOWSKI/AFP via Getty Images)

(CNSNews.com) - As President Donald Trump tweets his frustration with what he calls "Obamagate," former President Barack Obama is emerging from the shadows, following the leak of his comments from last Friday, where he slammed the motion to dismiss charges against Trump's former National Security Adviser Gen. Michael Flynn.

“There is no precedent that anybody can find for someone who has been charged with perjury just getting off scot-free,” Obama said in a taped phone call to his supporters on Friday. “That’s the kind of stuff where you begin to get worried that basic—not just institutional norms—but our basic understanding of rule of law is at risk.

On Monday, former independent counsel Ken Starr told Fox News's Laura Ingraham that by weighing in, Obama has "opened himself up to some of the most serious questions over the last...four years."

Don't jump to conclusions, but let's ask the questions. He is now, I believe, with all due respect, opened himself up to some of the most serious questions over the last -- certainly, the last four years.

Even the Wall Street Journal Editorial Board wondered on Sunday what Obama is "really worried about":

"Barack Obama is a lawyer, so it was stunning to read that he ventured into the Michael Flynn case in a way that misstated the supposed crime and ignored the history of his own Administration in targeting Mr. Flynn. Since the former President chose to offer his legal views when he didn’t need to, we wonder what he’s really worried about," the WSJ Editorial Board wrote.

Flynn’s lead attorney Sidney Powell told Fox News’s Sean Hannity on Monday that Obama’s comments “reflect that Mr. Barr is over the target and apparently dropping some effective bombs. And he (Obama) is desperate to try to rally the troops to buttress his pathetic arguments.”

Who leaked the names on FISA warrants?

More information is expected to emerge soon, as Acting Director of National Intelligence Richard Grennell releases the names of the Obama administration officials who requested the unmasking of people being surveilled by FISA warrants.

As Ken Starr noted, the unmasking isn't the problem: "The key is, who leaked the classified information? ...That is the crime. That's the very serious crime.

"So if the unmasking was related to an understanding that there would then be a leak to David Ignatius or whomever of The Washington Post, then that person may very well be in jeopardy, but the key is who leaked the classified information," Starr said.