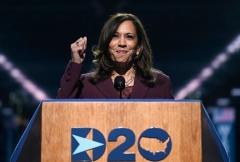 Because the reality is that the life of a black person in America has never been treated as fully human. And we have yet to fulfill the promise of equal justice under law.

We have come a long way in our country toward building a more perfect union, but the time is now, right now, to take the next step forward.

Harris also addressed the "pain, hurt and destruction in the aftermath of yet another black man shot by police.

She was talking about the looting, burning and violence in Kenosha, Wisconsin, after a white police officer shot Jacob Blake, a black man, seven times in the back after Blake repeatedly refused police orders to stop and appeared to be reaching into his car for the knife he admitted he had.

Here's how Harris described it:

As Vice President Biden put it, the shots fired at Mr. Blake pierced the soul of our nation. It’s sickening to watch. It’s all too familiar. And it must end.

Thankfully, he is alive today, but he is fighting for his life, and he shouldn’t have to be. My heart goes out to the Blake family as they endure an ordeal that is tragically common in our country."

Harris said she and Biden spoke with Blake's family on Wednesday. "They are an amazing group of people with extraordinary courage. Even in their pain and their grief -- even as they seek justice for their son, they spoke about the need to end the violence and heal our nation.

(As CNSNews.com reported, Vice President Mike Pence last week called it "remarkable" that Joe Biden didn't mention law and order in his speech to the Democrat National Convention. "And it's also remarkable...that the Democrat nominee for president of the United States never mentioned the violence that is claiming lives and destroying property in major cities across this country," Pence said.)

And after the murders of Breonna and George and Ahmaud and so many others, it is no wonder people have taken to the streets. I support them. We must always defend peaceful protests and peaceful protesters. We should not confuse them with those looting and committing acts of violence, including the shooter who was arrested for murder.

And make no mistake. We will not let these vigilantes and extremists derail the path to justice. Here’s my promise to those mothers and fathers and all who stand with them. In a Biden-Harris administration, you will have a seat at the table, in the halls of Congress, and in the White House.

We all grew up citing the Pledge of Allegiance, but now we must give real meaning to its words: 'One nation, under God, indivisible, with liberty and justice for all.’