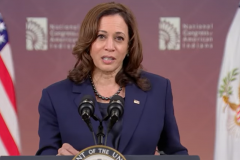 (CNSNews.com) - "It is an honor, of course, to be with you this week, as we celebrate Indigenous People's Day -- as we speak truth about our nation's history," Vice President Kamala Harris told the annual convention of the National Congress of American Indians on Tuesday.

She did not name Christopher Columbus, lumping him in with "European explorers," who were evil people, she indicated:

Since 1934, every October, the United States has recognized the voyage of the European explorers who first landed on the shores of the Americas. But that is not the whole story. That has never been the whole story.

Those explorers ushered in a wave of devastation for tribal nations, perpetrating violence, stealing land, and spreading disease. We must not shy away from this shameful past, and we must shed light on it and do everything we can to address the impact of the past on native communities today.

Harris mentioned the "epidemic" of missing and murdered girls and women on Indian reservations, which is no fault of the European explorers.

Harris said she believes now is the time to change things -- and of course, that means passing the entire Biden social welfare agenda and the Democrats' voting overhaul bills.