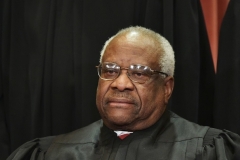 On Monday, the court refused to hear several election-related cases from Pennsylvania, where the state supreme court (not the legislature) extended the deadline for mail-in ballots from November 3 (Election Day) to November 6.

Justice Thomas wrote an 11-page dissent, noting that the Constitution authorizes each state to set federal election rules. "Yet both before and after the 2020 election, nonlegislative officials in various States took it upon themselves to set the rules instead."

Thomas said the court's failure to hear the challenges two years before the next election is "inexplicable" and "baffling."

The Pennsylvania Legislature established an unambiguous deadline for receiving mail-in ballots: 8 p.m. on election day. Dissatisfied, the Pennsylvania Supreme Court extended that deadline by three days. The court also ordered officials to count ballots received by the new deadline even if there was no evidence -- such as a postmark -- that the ballots were mailed by election day.

That decision to rewrite the rules seems to have affected too few ballots to change the outcome of any federal election. But that may not be the case in the future. These cases provide us with an ideal opportunity to address just what authority nonlegislative officials have to set election rules, and to do so well before the next election cycle. The refusal to do so is inexplicable.

"For one thing, as election administrators have long agreed, the risk of fraud is 'vastly more prevalent' for mail-in ballots," Thomas wrote, quoting an Oct. 6, 2012 New York Times article. "The reason is simple," he continued, quoting again: “[A]bsentee voting replaces the oversight that exists at polling places with something akin to an honor system.”

"Because fraud is more prevalent with mail-in ballots," Thomas wrote, "increased use of those ballots raises the likelihood that courts will be asked to adjudicate questions that go to the heart of election confidence."

Thomas concluded his dissent by saying Americans deserve better from the court:

"The decision to leave election law hidden beneath a shroud of doubt is baffling. By doing nothing, we invite further confusion and erosion of voter confidence. Our fellow citizens deserve better and expect more of us. I respectfully dissent."