John Madden at NFL Hall of Fame: 'I Believe That the Busts Talk to Each Other. I Can't Wait for That Conversation.' 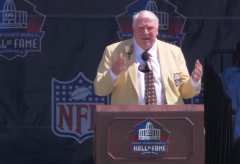 Legendary NFL football coach and sports broadcaster John Madden speaks about the sport he loved so much at the NFL Hall of Fame in August 2006. (Photo: Screen capture)

And if his 2006 prediction comes true, he'll be conversing with the legendary players and coaches who predeceased him -- in the quiet of the night, when the lights go out in the NFL Hall of Fame.

In 2006, Madden was inducted into the NFL Hall of Fame, and in his speech on that occasion, he mused about immortality:

[T]he Hall of Famers behind me, that's what it's all about. I was reading the NFL stats and history book. That's what you do when you ride a bus. When you don't fly, you read big old thick books like that. But they had a chapter on history. The first page in the chapter of history was a list of the Hall of Famers. I said, that's right, they got it. That is our history.

I know going in with these guys is so special. We always talk about immortality. Some of us think maybe we will be immortal, that we'll live forever. When you really think about it, we're not going to be.

But I say this, and this is overwhelming, mind-blowing, that through this bust, with these guys, in that Hall, we will be forever. You know, when you think of that, it just blows your mind. It's forever and ever and ever.

You have to stay with me a moment on this one. This is a little goofy here. You're going to say, There is old Madden being goofy again. But I started thinking about this after I got voted into the Hall of Fame. The more I think about it, the more I think it's true. Now I know it's true and I believe it.

Here is the deal: I think over in the Hall of Fame, that during the day, the people go through, they look at everything. At night, there's a time when they all leave. All the fans and all the visitors leave the Hall of Fame. Then there's just the workers. Then the workers start to leave. It gets down to there's just one person. That person turns out the light, locks the door.

I believe that the busts talk to each other. I can't wait for that conversation, I really can't. Vince Lombardi, Knute Rockne, Reggie, Walter Payton, all my ex players, we'll be there forever and ever and ever talking about whatever. That's what I believe. That's what I think is going to happen, and no one's ever going to talk me out of that (laughter).

These guys are going, Oh, no, hope I don't have to put up with his BS for an eternity....

The Hall of Fame offers Madden's view of football in Madden's own words:

"Coaching isn’t work," the affable Madden once said. "It’s more than a job. It’s a way of life."

And for him, it was a way of life: "I didn’t go into it to make a living or because I enjoyed it. There is much more to it than just enjoying it. I am totally consumed by football, totally involved. I’m not into gardening…or any other hobbies. I don’t fish or hunt. I’m in football."