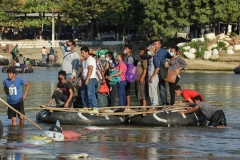 People cross from Guatemala to Ciudad Hidalgo, Mexico on January 18, 2021, as a new migrant caravan, mostly Hondurans, heads to the USA. (Photo by ISAAC GUZMAN/AFP via Getty Images)

(CNSNews.com) - "There is absolutely reason to be concerned" about security at the Southwest border, Brandon Judd, the National Border Patrol Council president, told Fox News on Thursday.

"And when you look at what's currently happening in real time on the border right now, today, several of our agents in the Tucson sector took into custody 24 unaccompanied minors from Guatemala. So, we're already seeing that effect of this rhetoric and the policies that are going to be passed.

"And if we don't get a handle on that, there's going to be serious trouble."

Judd warned that the caravans are coming from Central America, anticipating leniency from the new Biden administration. And he credited former President Donald Trump with doing a "great job" on border control:

He put a stop to that. And we have to look at those policies and say he did a great job from a policy perspective, and he controlled our borders.

"And if Mayorkas, when he gets confirmed and he steps in, and he takes a look at this and looks at, OK, how are we going to get rid of the Trump policies, but what policies are we going to put in place to effectuate the same thing that the Trump administration accomplished?

"And if he can do that, then we can still maintain border security. But there is absolutely reason to be concerned."

In his first hours in office, President Biden has called for a "comprehensive and humane immigration system that operates consistently with our Nation’s values."

In various executive actions, he has ordered a halt to construction of Trump's border wall; and he has ordered his administration to "reset the policies and practices for enforcing civil immigration laws" -- relaxing interior enforcement.

Biden also is sending Congress a comprehensive immigration reform bill, The U.S. Citizenship Act, that would put millions of illegal aliens already in this country on a path to citizenship and change the word "aliens" to "noncitizens" in law-making.